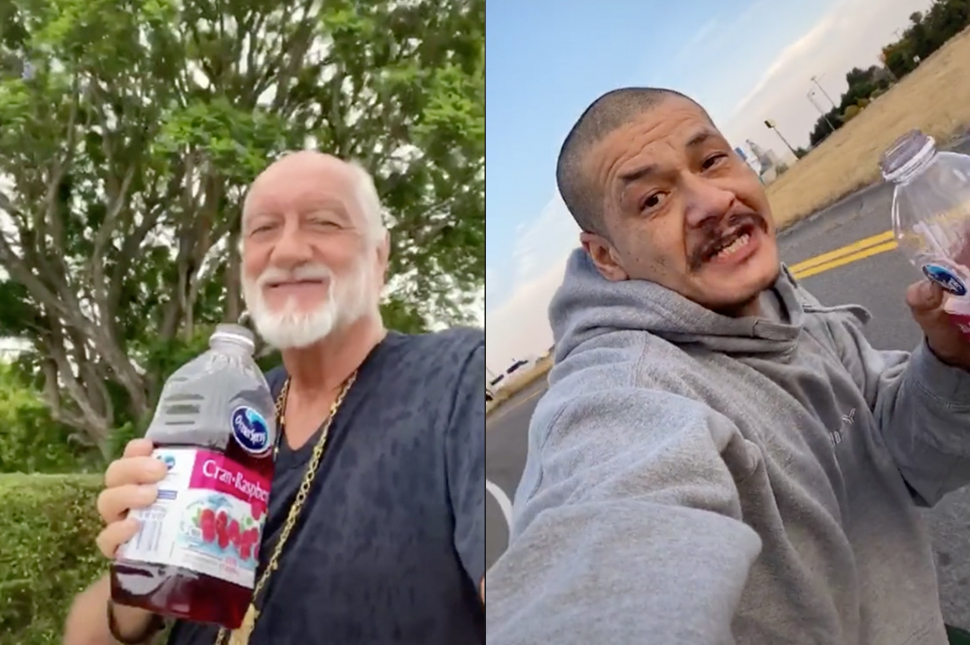 Things have gotten even better in the whole 'guy on a skateboard chugging cranberry juice lip-syncing Dreams' sensation, with Mick Fleetwood now sharing this own take on the video.

If you're not familiar with the clip, Nathan Apodaca (who goes by the handle @420doggface208) uploaded a video of himself skating down a freeway and singing along to the Fleetwood Mac 1977 hit while drinking from a bottle of Ocean Spray.

The video went viral soon after uploading to TikTok and has now had 21.1 million views on the platform alone, as well as appearing on other social media platforms.

Fleetwood's now jumped on the trend too, paying tribute to Apodaca with his own version of the video uploaded earlier today. Check out both videos below.

Apodaca's video has given Dreams a huge boost too, with the track re-entering charts around the world including here in Australia where it landed at #39 on the ARIA Singles Chart over the weekend.

Streaming figures have seen a substantial jump too, with Rolling Stone reporting last week that Spotify saw a 127% increase on streams of the song, with a 242% increase in first-time listens. Shazam has seen a 1,137% increase in Shazams for the track.

TikTok has proven itself as a great music discovery tool for the Zoomer generation this year.

Australian band Vacations saw a 137% increase in streaming figures after their track Young got caught up with in a Skins-themed trend earlier this year, while a new generation fell in love with classic Scottish goth group Cocteau Twins after their tracks Heaven Or Las Vegas and Cherry-coloured Funk appeared on the platform.

It's clear that TikTok understands the impact these trends are having too, with former triple j content director Ollie Wards recruited as their first local director of music.

The role will see Wards take on responsibility for "building partnerships with local artists, talent managers, record labels and distributors to execute campaigns and build music careers across Australia and New Zealand". Read the story here.