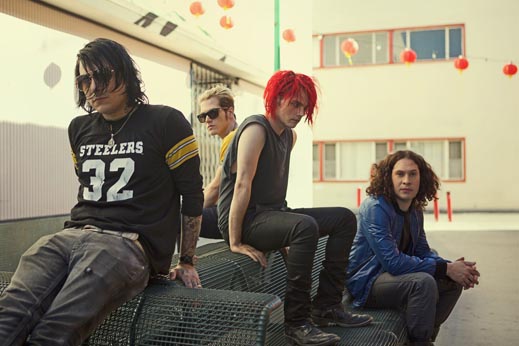 My Chemical Romance's return to Australia this year was dealt a last minute blow due to the COVID pandemic, but fans may finally be getting to see the shows they've waited so long for.

The US outfit have announced this week that they'll be performing in New Zealand in 2021 after being forced to postpone the show originally scheduled for March.

While nothing is confirmed yet, My Chem fans can only hope that the trip to New Zealand will ensure that they also visit Australia next November where they were also forced to postpone due to the 2020 Download Festival being cancelled, which they were set to headline in Melbourne and Sydney.

"We felt this was the right decision for our fans, our band, our crew, and our families given the current global situation," the band said in a statement at the time.

"We apologise to our fans, but please know that we didn’t come to this decision lightly.

"Thank you for your understanding and we look forward to being with you all again as soon as we can. In the meantime, please be good to each other."

My Chemical Romance finally reunited last year having not played together since 2012. The New Jersey-founded group were scheduled to perform some massive shows around the world, including the aforementioned Download Festival in Australia, however the COVID pandemic put an end to all touring plans.

Appearing on the The Green Room with Neil Griffiths podcast earlier this year, The Used frontman Bert McCracken addressed speculation that they and My Chemical Romance were planning a joint headline tour.

"We do have some really awesome news to announce pretty soon," McCracken told host Neil Griffiths.

"Obviously, the second you see someone announce a reunion tour, you're like, 'Get on me that mother!' I've been texting Gerard like crazy."

Adding with a laugh, he said, "But I've also just been announcing that we are on it, just because, yeah, we should be."

Check out the full The Green Room episode with McCracken on Spotify, Apple Podcasts (below) or wherever you listen to your favourite podcasts.