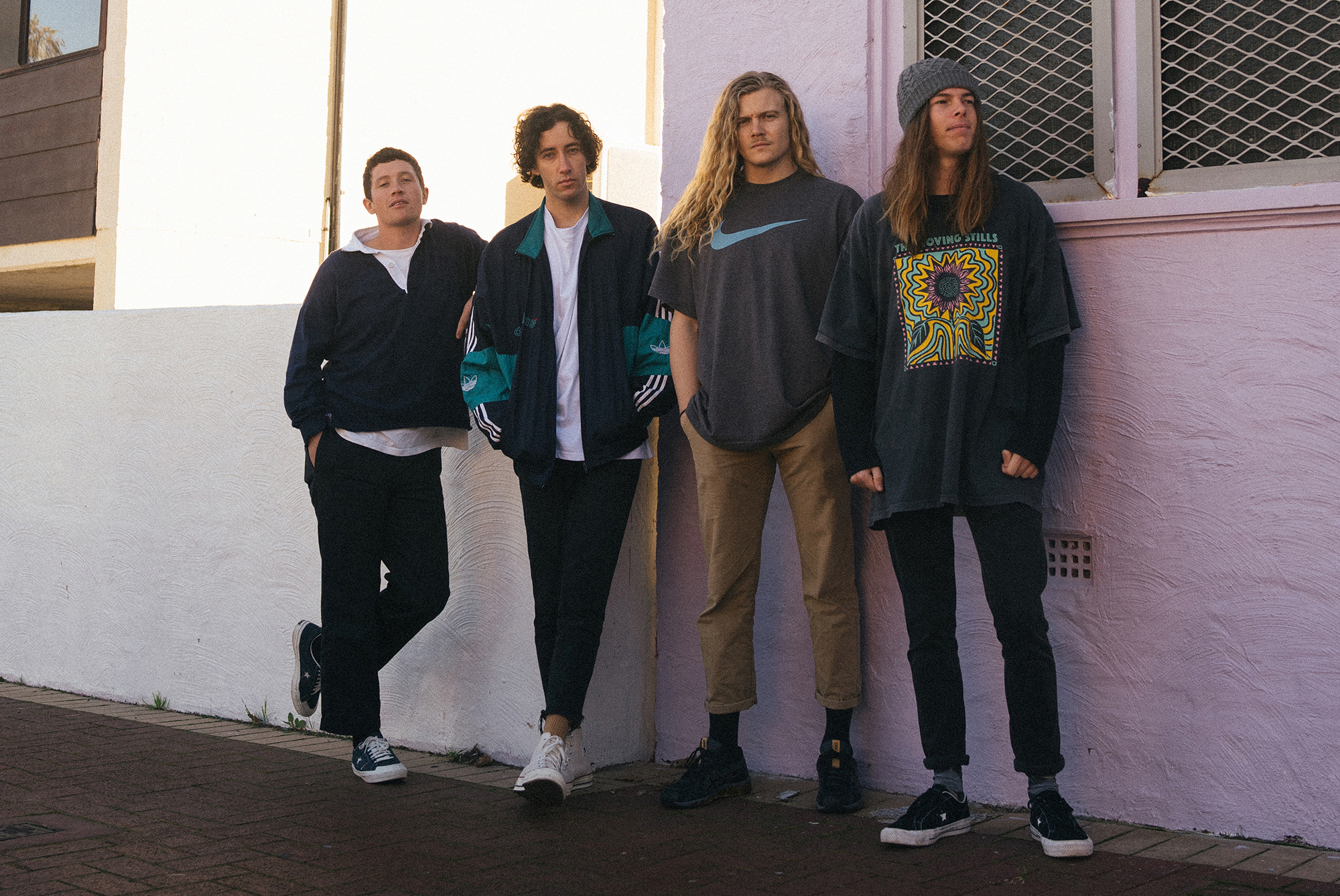 MATT: “I started working on the chords and vibe to this after listening to the Beatles and Oasis heaps, and I’d just finished the book The Love You Make about the Beatles, such a good book. Shout out to Kelsie for suggesting that one. I remember Al and I working on the chords and a general rough demo of the song and the initial guitar riff at the start is the very first thing I played and it stuck since. This song was one we felt that co-writers Matt Corby and Alex Henriksson would have a lot to add and they did, couldn’t have turned out better.”

ALEX: “This song is about being apart from the person you love and how time apart lets you mull on all the beautiful bits of being together and all the bits you aren’t used to yet.”

CAL: Yeah, Tracing Faces is a super cruisy song and it was originally like a massive rock anthem. In this studio we kinda went for a super chill vibe and it worked out to be super sick. Really enjoy this one.”

MATT: “This one came together very quickly on a Chestnut Farm in the southwest of WA. Chris bought in the initial bass riff and we jammed it as a band and it fell together quite well with most of the parts staying quite similar till the end. Chris wanted to call it ‘Oden’s Pond’ after a pond on the farm, but we all thought that was too medieval-sounding, and named it Blur because it kind of reminded us of the band Blur.”

ALEX: “Blur is a fun, fun, fun tune that’s about the ups and downs of hitting the road with the band.”

CHRIS: “We were on a writing trip in 2019 staying at a Chestnut Farm in Nannup (south-west of Perth), where each morning I’d go for a walk and sit by this dam that had an old wooden stating its name: Oden’s Pond. At the beginning of the trip, I’d shown the rest of the boys a riff on guitar, which was the beginnings of a song that eventually became the album track, Blur. However, at the time of us jamming, I thought it’d be funny to pay tribute to my favourite patch of murky water where I’d have a smoke and listen to the wonders of nature as they woke. I still refer to as ‘Oden’s Pond’ just to wind Preeny and Al up.”

CAL: “Yeah this one is super fun, Chris came up with the riff and we jammed it down at the Chestnut Farm and it was heaps of fun to write. Inspired by King Gizz, yew.”

MATT: “I remember sending a demo to Alex and initially thinking it wasn’t a cool song and I hated the riff I played but he frothed it and we ended up writing a full song around it and jamming it well over a year ago. We didn’t really know what vibe to take it but that’s where Corby and Henriksson really helped us develop it into what it is sonically. One of my favourites off the album.”

ALEX: “Deep End is about summoning up the courage to make a hard decision when you know you’ll have to let someone down.”

CHRIS: “Began as a rough demo from Preeny which he initially named Sugar Lizard.”

CAL: “Deep End is such a chiller it’s my fave off the album. When we were gonna record it I decided to play the groove on brushes because I was like we don’t have a song with brushes. Anyways, I learnt from this song the power that the drums have to change the whole vibe of a song, we usually record drums first and I wonder I hadn’t like played with brushes how the song might have turned out. Pretty cool.”

MATT: “This song developed from two separate song ideas, a verse progression that Al had and a chorus progression I had. We wrote it in the basement studio of Henriksson’s house. We tried tinkering with the two song ideas for ages before someone (maybe Al) had the idea to join the two together and then the song came about from that. Was also one we needed Corby and Henriksson’s help sonically when recording it properly. They really bought all the sonic elements out perfectly. The chitter-chatter at the start and end of the song is an iPhone recording of people talking at the airport while we waited to head home from a massive tour, just after I recorded it we pranked Chris into thinking he’d left his phone back at the airport while we were on the plane.”

ALEX: “I Wonder is a snapshot of the first couple weeks of dating someone and not knowing how they feel.”

CHRIS: “Fun fact: After a few too many gins on the first night of recording at The Music Farm, we spent half an hour recording each other ripping different types of gaffer tape which we’d then douse in reverb. The background noise that can be heard at the beginning of this track was recorded in Sydney Airport as a voice memo on one of our iPhones whilst a few of us walked around the airport intoxicated after having a few to many during a celebratory lunch with our support band for that tour and fellow mates, Dulcie.”

CAL: “Aw, this song was super fun to record. Was the first song was smashed out in the studio and is full of the big exciting first day vibes from recording. I remember it was a beautiful day when we recorded and the chorus for me just takes me back to a good time. Love this vibe of this one.”

MATT: “This one was one of the first songs written, and was re-recorded many times throughout the year but ended up not changing too much apart from a lot extra being added right at the end. Super stoked to how this turned out.”

ALEX: “This song is kind of the answer to Deep End because it’s about truly understanding that you’re making the right call even though it’s tough.”

CHRIS: “The four of us recorded gang vocals for the chorus but made the obvious choice to use Corby’s take instead.”

CAL: “This song Preeny wrote the drum groove actually in the verse but I really liked it so I kept it. Good job Preen. Fun fact is that this song has like two different snares on it. Chorus is a blast to play on drums. Real angsty.”

MATT: “This started as a real trashy vibe and the chorus you hear was in the original demo but we weren’t going to use it and then while trying to come up with something in the studio we decided we actually liked it and now it’s my mums favourite part on the album. The whole song is actually pitched and slowed down the tiniest little bit so if you try play along on guitar it will sound strange.”

ALEX: “Coasting is a sort of trashy tune but the lyrics are positive and it’s just about being the you that’s within yourself.”

CHRIS: “Interesting fact: We experimented with recording instruments and vocals at a different speed before slowing them down to the original tempo to try and create a sense of unease/tension for the listener. I think the drums where the only thing that we kept on the track from that experiment because everything else sounded whack.”

CAL: This one’s a dark horse for me. I actual froth it, the vibe is sick. The 7/4 groove feels so natural and the chorus groove hits so hard.”

MATT: “Probably the one song that changed the least from when we first wrote it. Apart from the bridge, most of the rest of the song stayed the same. Sonically, we thought it needed that extra layer and that’s where Corby came in and really helped out.”

ALEX: “I feel like this song is real cuddly and warm. It’s all about falling in love.”

CHRIS: “Fun fact: We to tried playing it live at an Easter Long Weekend gig only a few days after we’d up with a rough structure whilst at the Chestnut Farm in Nannup. A few of us had enjoyed a couple to many gins and the bridge to the song was a bit of a train wreck. Luckily, the crowd watching was made up of the most plastered punters we’d ever encountered at one of our shows, so hopefully no one noticed.”

CAL: “This one captures like a rainy day kinda vibe. Its feels cosy as to me.”

MATT: “Another one that was written on the Chestnut Farm, the original demo was just a live one take of us jamming it and then working out how we could make it sound a bit richer. Henriksson and Corby really helped take this one to another level with all the extra layers.”

ALEX: “This is a slow one but one of my favourites. It’s about feeling the guilt of letting someone you love down.”

CHRIS: “Fun fact: The bridge came from a brainstorm between Corby, Henrikkson and GG. Everyone was gathered around the outdoor table, waking up with their morning coffee in hand at The Music Farm where we were passing around a few acoustic guitars trying to write another section. Corby began playing some pretty chords he’d heard in his head and the rest of the parts came together from there.”

CAL: “The nice slow one. This one is special.”

MATT: Was written a long while back in my bedroom as a demo idea, and not thought too much of originally. But we jammed it for the first time as a band in the old museum in Brisbane and that was where we found the chords for the chorus on guitar and then the song came together very quickly while there. It had a range of influences but ended up coming out exactly how we imagined it.

CHRIS: “Fun fact: We jammed and recorded a raw version of this song at The Old Museum in Brisbane, where we did half a week of demoing with Alex Henrikkson. The meat and potatoes of the version that we recorded for the album had the same form and very similar parts to the recording made in the Museum. It is the most stripped back song on the album in terms of overdubs and additional instruments.”

CAL: “Love this vibe and totally was inspired by Radiohead.”

MATT: “I was sat in the studio in Byron Bay playing this beautiful old acoustic guitar and had some chords I was jamming and Alex was outside with Corby and Callum and called out saying to come out and play it because it sounded nice. So I went outside and started jamming while Alex hummed some stuff. When I finished it turned out Corby had recorded it on his iPhone and it was super nice with all the background noises. So we thought it could be a cool chiller outro to the album.”