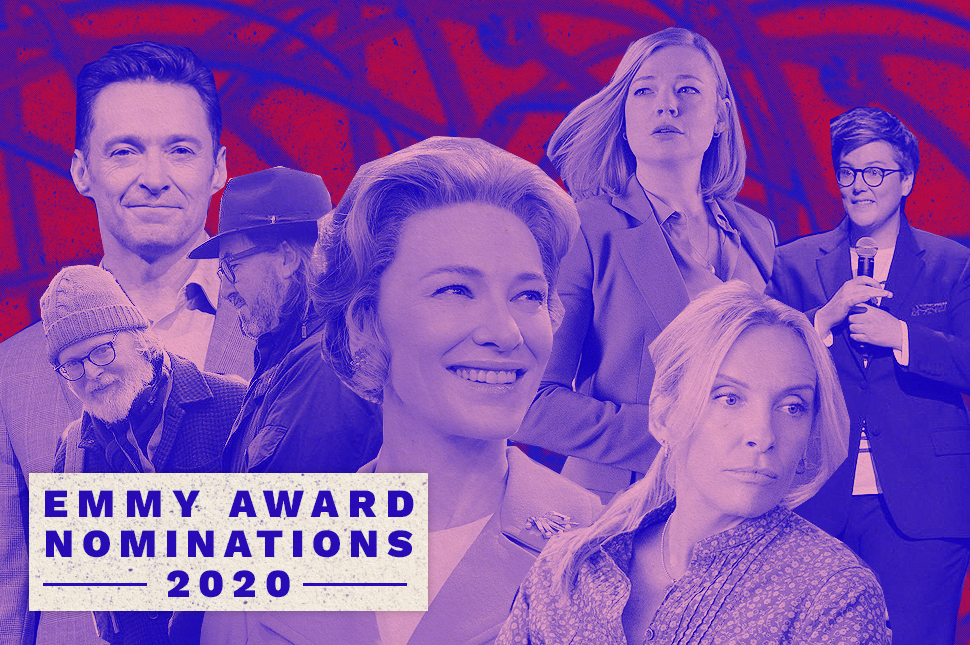 Australian talent has clearly impressed this past year with local actors, comedians and writers picking up nominations for this year's coveted Emmy Awards.

Leading the way is comedian Hannah Gadsby who has scored two nominations for her special, Douglas.

Gadsby picked up the award for Outstanding Writing For A Variety Special for her hit show Nanette in 2019.

Writer Tony McNamara is nominated for Outstanding Writing for a Comedy Series for The Great. McNamara picked up an Academy Award nomination for Best Original Screenplay for The Favourite in 2018.

Cate Blanchett has picked up a nomination for Lead Actress in a Limited Series or Movie for Mrs America, seeing her nominated with Regina King (Watchmen), Octavia Spencer (Self Made), Kerry Washington (Little Fires Everywhere) and Shira Haas (Unorthodox).

Hugh Jackman has scored a nomination for Lead Actor in a Limited Series or Movie for his role in Bad Education, seeing him up against Mark Ruffalo (I Know This Much Is True), Jeremy Irons (Watchmen), Paul Mescal (Normal People) and Jeremy Pope (Hollywood). Jackman has previously picked up an Emmy for his work hosting the 58th Tony Awards back in 2005. Bad Education is also up for Outstanding Television Movie.

This year's heavy hitting shows include Watchmen with 26 nominations, The Marvelous Mrs Maisel with 20, Ozark and Succession with 18 each and much-loved Canadian comedy Schitt's Creek picks up 15 nominations.

It's been a big year for New Zealand's Taika Waititi too, with two projects he's involved with scoring nods. Waititi has picked up a nomination for Outstanding Character Voice-Over Performance for his portrayal of IG-11 in The Mandalorian. The Jon Favreau helmed show also picked nomination for Outstanding Drama Series (Waititi also directed episode eight of its season).

READ MORE: Hannah Gadsby's Audience Found Out She'd Won An Emmy For 'Nanette' Before She Did

Nine Inch Nails' Trent Reznor is up for Music Composition For A Limited Series, Movie or Special (Original Dramatic Score) alongside Atticus Ross for their work on Watchmen. The pair won the Academy Award for Best Original Score back in 2011 for their work on The Social Network. They are also up for the Original Music and Lyrics award for the show, with Pharrell Williams also nominated in the category for The Black Godfather.

Kamasi Washington is up for Music Composition For A Documentary Series Or Special (Original Dramatic Score) for Michelle Obama's Becoming, while Devo's Mark Mothersbaugh is also up for the award for his work on Tiger King: Murder, Mayhem And Madness.

The Apollo is up for Outstanding Documentary or Nonfiction Special, as well as Laurel Canyon: A Place In Time. Laurel Canyon has also been nominated for Sound Mixing For A Nonfiction Or Reality Program (Single or Multi-Camera). Wu-Tang: An American Saga sees Wu-Tang Clan member RZA up for Original Main Title Theme Music, while DJ, musician and composer David Holmes is up for Music Supervision for his work on Killing Eve.

Rihanna's Savage X Fenty runway show has been nominated for Choreography For Variety Or Reality Programming, while the Super Bowl LIV Halftime Show featuring Jennifer Lopez and Shakira is up for Lighting Design/Lighting Direction For A Variety Special and Music Direction. Also nominated for the Music Direction category is Shiela E, Jerry Jam and Terry Lewis for their Let’s Go Crazy: The Grammy Salute To Prince.

Bette Midler picks up a nomination for Outstanding Guest Actress In A Comedy Series for her appearance in The Politician, while Dolly Parton's Heartstrings: These Old Bones is up for the Television Movie award and James Corden's Carpool Karaoke: The Series has been nominated for Short Form Variety Series.

The awards will this year be hosted by Jimmy Kimmel and take place on 20 September.