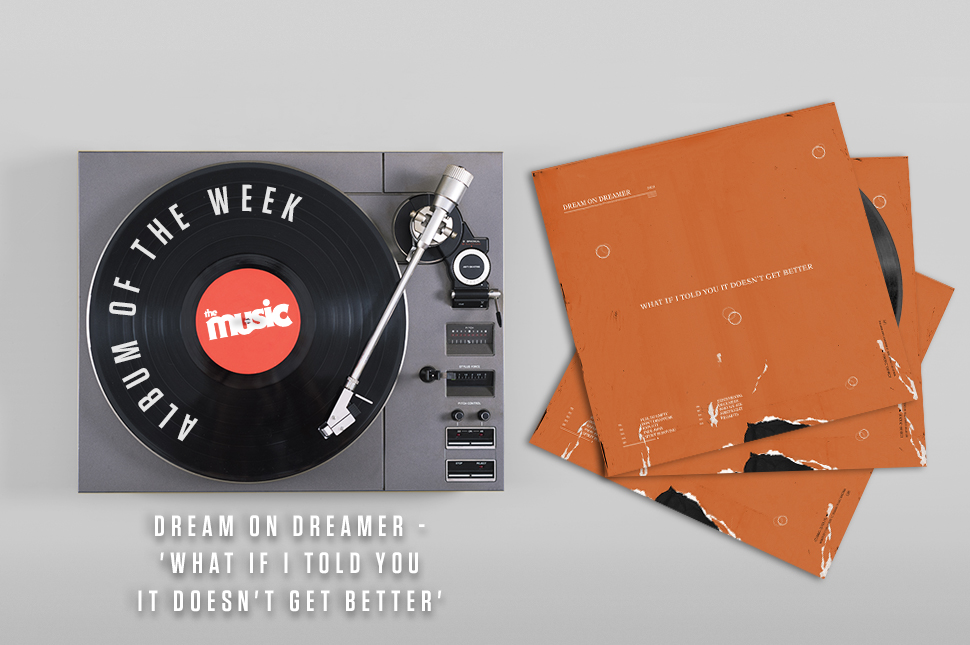 Dream On Dreamer’s farewell album, What If I Told You It Doesn't Get Better, takes on a whole new meaning when you have insight into each song and the band’s processing in writing it/saying goodbye to fans.

The Melbourne post-hardcore group took us track by track through their final LP, a release The Music has named Album Of The Week.

“When we were writing this song, I guess it came from a pretty low place. We’ve all been through a lot of shit in the past few years and it’s all manifested its way onto our next release in some way or another. I think being in that down state of mind needs to be given a name or something to embody it. Some call it their demons. In this song, I named the darkness Reaper. Sometimes we gotta crash and burn all the way to rock bottom before we can push up again. There have been times I hope to see the bottom. I've been ready to look the Reaper in the eye and give him this weight. In the end, If we beat this shit and fight through, the weight is lifted and we can live to see a brighter day."

"This song is the first of many in the album that really delves through the introspective emotions that have been involved in ending Dream On Dreamer. We have had and always will have the most gracious and supportive fans. We owe them so much and the debt of gratitude we have weighs heavy on our hearts. This song is about how we felt as a band when the vision was ending, when 'everything was changing and we needed to find some new meaning,' but it is also a song about the people who have had something to lean on in these tracks over the years. Something to keep them believing. It breaks our hearts when they say, 'I need you here, don’t disappear.' We hope these songs and our whole back catalogue will continue to bring hope, understanding and a place to find peace. That is what we have always wanted for the dreamer family, ourselves included."

"The song starts with an introspective conversation between ourselves and people who listen to our music. It’s no secret that sometimes fans expect something from an artist that they aren’t dying to give you any more. There are so many elements to the journey as a band that aren’t seen and our fans also have so many experiences that we will never understand too. This song takes a two-sided look at the group dealing with the challenges in front of them while still pushing to give their all until the last drop: 'I've seen the struggle but you don’t know the half of it/Nothings gonna bring me down.'"

"This track is something special. The conversation inside the group really starts to show lyrically. Wrapping our heads around moving forward and giving our family (fans) the truth about how we were feeling: 'I've been here pulling apart almost everything…' is an insight into overthinking and going in circles with our cycles. Eventually, when your friends are hurting, you need to have a moment where you sit down and you acknowledge what’s going on: 'I see your hell/I see your scars/I know you’re hurt and I know that life gets hard.' We have all felt the emotions of ending this band. At different points we’ve all felt so low and like there was nothing after it. This song is an ode to change and when Marcel comes around the last chorus corner and hits the outro with 'I know you fear that end is near,' he shows the breakthrough. He gives our truth and ends with a bomb: 'I hope you know that we will never be the same...'"

"This one is really close to our hearts. When you play music to heal and help people rise up through the daily darkness, how do you then deal with your own struggles? I know we all feel at some point that we need to show the strong side and be tough but been an empty shell emotionally ourselves. As a band, we’ve had times that it felt like we couldn’t go on stage and give our fans what they needed. 'Can I be hope for the broken, and still feel like I’m nothing?' The truth is, when we feel so low and think it’s impossible, there have been incredible moments of breakthrough and clarity through playing live. So join us in this cathartic realisation of the way things are. Be it the spirit of music, the spirit of the ever-moving universe or your own resilient soul being… it's moving… it's breaking in and healing things…. "

"This one has some real attitude in it and covers some more dialogue about the state of the band and the world surrounding it. Sometimes we need to zoom out to see the bigger picture. It's hard to see the cracks appearing when we are so focused on full steam ahead. It has some real parallels to be drawn in our current situation on earth. A sustainable future is something increasingly important to this generation and will be for many years to come. 'Let's go find a better way to live/We’re falling apart and I’m sorry to mention it.'"

"An ode to loneliness. A look at the terrifying beauty of loneliness. The power of disappearing into your mind to find someone lost or gone forever. We can’t change some things in life. There is a line to be walked between living in the past and heading for the future. Nostalgia is a strong sense in the human experience but sometimes we need to put some memories to rest when your heart has taken all that it can take."

"With an industrial future in its soundscape, this song takes a look at the state of this planet. We work at breakneck speed for a technological kingdom in the sky but will we lose sight of who we are? Watching scientists and AI specialists create a sentient technological future is like watching blindfolded children play by the cliffside."

"THIS IS AN ANTHEM FOR THE LONELY! The questions asked in this track map the journey through life and working out what makes us tick. How do we conquer the loneliness and anxiety we feel? Sometimes its a belief, it can be someone special or even your favourite band that save you and 'help you through the night ’til first light.' It’s something we all search for and we are honoured and a band to be that guiding light for the people that listen and support what we do. This song is RIDDLED with influences and riffs that speak to our nostalgia loud and clear!"

"A bittersweet ending. This one is dedicated to every fan that has stood by us. For all of you that held on through tough times we had and dark spots in our career. Regrets can tear up a person's life and hold them in chains forever. That's not what life is meant to be. For ANYONE. I want people to listen to this song whenever they feel life on their back. Today is a new fucking day. Today you can try again. There is no need to let yesterday define you. Throw those fears into the ocean of forgetfulness… 'Never coming back again.' Goodbye."

The Music reviewer Rod Whitfield said What If I Told You It Doesn't Get Better "takes the listener on an ever-moving, ever-evolving, ever-changing journey".

"When a well-known band releases an album after they announce they’re calling it quits such as Dream On Dreamer, it begs a whole bunch of new questions beyond simply, 'Is it any good?' Namely - 'Is it a fitting swansong to their career?' The Melbourne heavy rock/metalcore act answer that in no uncertain terms on this, their fifth and final record."