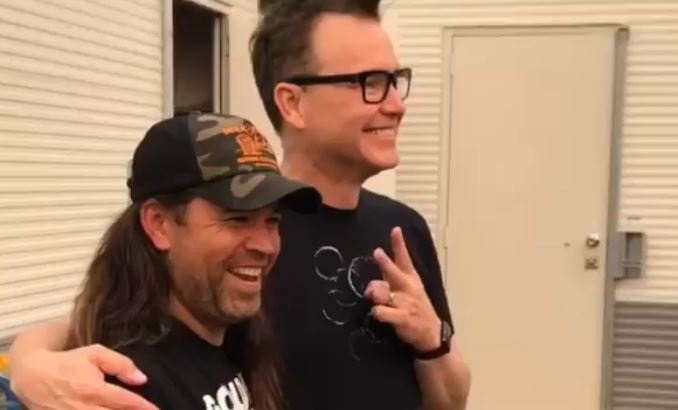 Violent Soho fans may be aware that the band are mad blink-182 fans, so when Mark Hoppus gave the Brisbane boys a heads up he was going to watch them perform live, understandably they... lost their shit.

Appearing on the latest episode of The Green Room Podcast with Neil Griffiths, guitarist James Tidswell recalled their run-in with Hoppus last December, who was performing on the 2019 Good Things Festival with side project Simple Creatures, alongside Violent Soho.

"He had hit us up earlier, actually a couple of times," Tidswell told host Neil Griffiths.

"I knew that he was across us... and then I ran into him at the airport in the morning and he was like, 'I'm coming to watch you tonight' and I'm like, 'Holy shit.'"

Hoppus made good on that promise and watched Violent Soho from side of stage that night, even filming some of the performance on his phone. Tidswell recalled the moment he realised the punk legend was watching.

"My daughter was standing side of stage right next to our guitar tech, Brad Fulton," Tidswell said.

"I turn around during In The Aisle I'm pretty sure, or just before... I look to her to get a vibe going or whatever and she's waving and I look over at who she's waving to and it's Mark Hoppus waving back at her. I'm just like, 'Oh my God.'

"I knew he was coming and I was already freaking out but once you go to play, you'd want to forget about that!"

Considering Hoppus first let Violent Soho them know he was a fan back in 2014, we'd say that's a pretty perfect way for things to come full circle and Tidswell even got a photo to remember the occasion.

"The biggest problem was, and I'm never shy of a word to say, I couldn't even talk to him," Tidswell told Griffiths.

"Man, I got questions, you know? I've got a lot of questions. I'd love to talk to him.

"My mate even had to say... 'If you wonder why we can't speak, it's because it's like meeting God.' We all burst out laughing and broke the ice."

Check out the full The Green Room episode with Tidswell on Spotify, Apple Podcasts (below) or wherever you listen to your favourite podcasts.