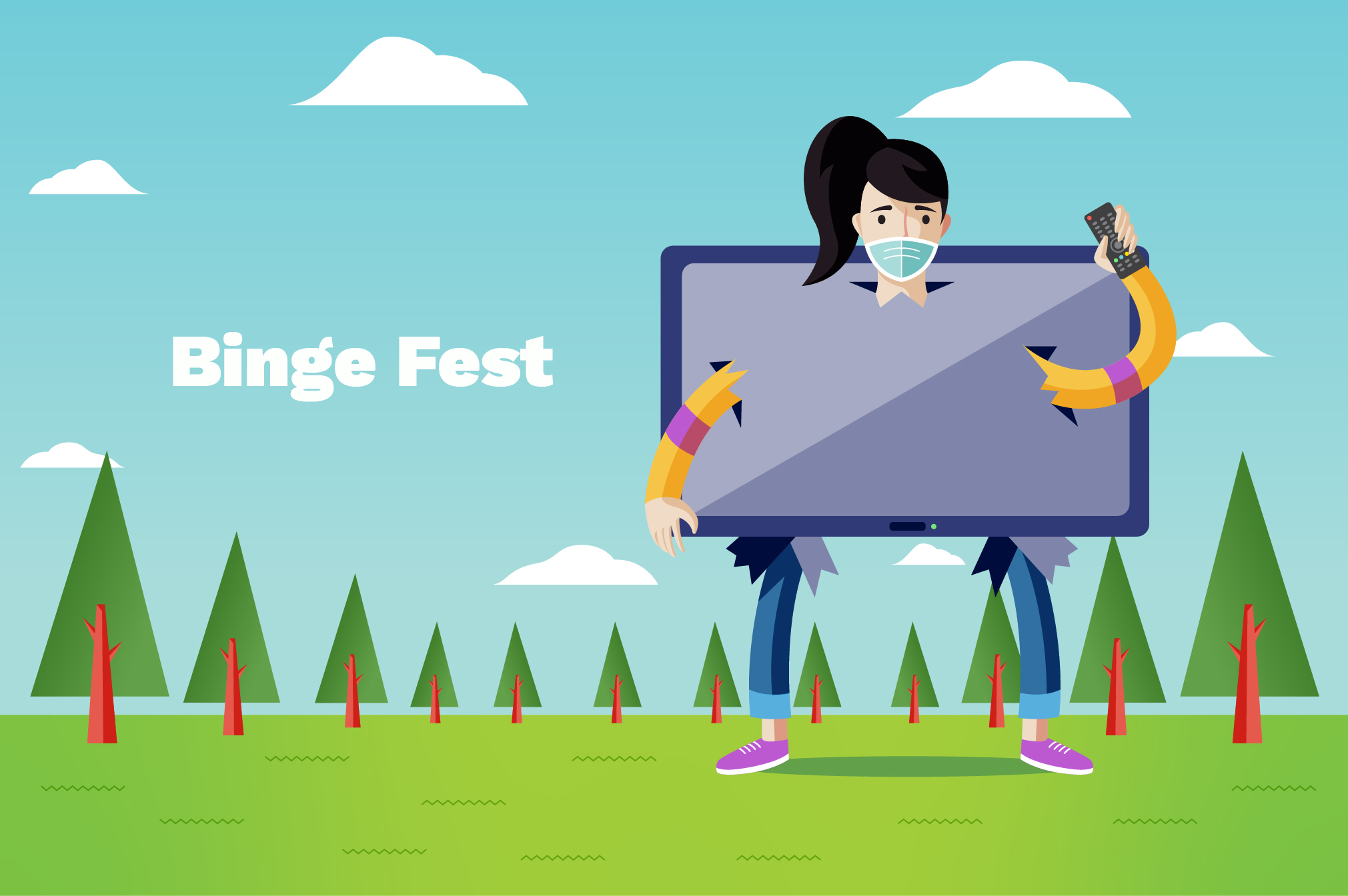 Logline: This 2012 UK supernatural series lasted one season before being dropped without explanation. Written by Jack Thorne (Skins, Shameless, the This Is England series, His Dark Materials) and for a show initially aimed at a younger audience it's scary as fuck. Marvel at the pre-fame cast of Daniel Kaluuya, Natalie Dormer, Tom Ellis and Ian De Caestecker.

Why binge now? Can’t give too much away but suffice to say there was something mysterious killing folk off in England - and staying indoors was a good way to stay safe. But, of course, a group of kids didn’t stay inside and manage to get themselves caught up in a pant-shitting escapade. At six eps it’s an easy afternoon binge.

Why binge now: While you’re in isolation you can experience some of the most stunning location cinematography you will ever see in a local drama. It will feel like you are outdoors alongside Detective Jay Swan as the drone cams glide across the beautiful Kimberly vista.

Logline: First introduced as a film in 1992, Buffy The Vampire Slayer launched as a TV series in 1997 and lasted seven beautiful seasons. The Joss Whedon-helmed show turned actors like Alyson Hannigan, Anthony Stewart Head, Seth Green, James Marsters, David Boreanaz and Michelle Trachtenberg into household names and then of course there was the wonderful and witty Sarah Michelle Gellar as The Slayer herself.

Why binge now? Look, if ever there was a time that we need a hero, it’s now. Buffy Summers can be that hero for us. I came into the Buffy fandom about 20 years late but my goodness am I well indoctrinated now… If you’re like me and get stuck right into it, you can smash through the show's seven seasons very, very quickly (you can read more about this over here). To be honest, I might even watch it again.

Logline: Australia was already familiar with comedy legends Gina Riley, Jane Turner and Magda Szubanski from shows like Fast Forward and Big Girl’s Blouse but it was Kath & Kim that really cemented them in the pop culture sphere. Launched in 2002 and running through to 2007, the show took the simple phrase “look at me” and turned into into a lifestyle.

Why binge now? Things are very serious right now and Kath & Kim isn’t, which makes it great and lovely to watch. There’s something really nice about the characters Riley and Turner have created here - the way they poke fun at themselves and us too but without even really being mean. And any show that can deliver a line as good as “Chardonnay, chardonnay, you pack of chunts” is fine by me. Pop on some footy franks and enjoy!

Logline: For fans of the show, binge watch it for the 3876th time, you won't regret it. For newbies, this is the show that launched the careers of the likes of Steve Carell, Ed Helms (The Hangover) and John Krasinski (A Quiet Place). Yes, it's the US spin-off of Ricky Gervais' original series. No, they are nothing alike. Both hilarious, both great viewing. Just sit back and relax. It's not hard... (if you knew what Michael Scott would say here, you'd be laughing by now).

Why binge now? 1. Because it's one of the funniest comedy series of all time. Everyone needs a good laugh right now. 2. It will probably be removed from local streaming services when it goes exclusively to NBC's new platform next year. So, get a move on. 3. Bears. Beets. Battlestar Galactica.

Logline: Yes, hello, this is a 29-year-old man recommending a show that first aired on ABC in 1984. Starring the late great Ruth Cracknell and Garry McDonald, the six season comedy series is a must watch for both fans of Australian shows and laughing in general. Cracknell, one of Australia's finest actors, turned in an incredible performance as the clueless and conniving mother, Maggie Beare, which saw her win multiple Logies and helped her become the first female to be inducted into the Logie Hall Of Fame. Watch it with your Mum. It's like looking into the future.

Why binge now? Surely reliving '80s Australia is better than what we're dealing with right now?

The Last Man On Earth

Logline: Extremely cooked ex-SNL star Will Forte stars as extremely cooked apocalypse survivor Phil Miller, who believes himself to be the last living person on Earth after a virus wipes out humanity. Hilarity ensues.

Why Binge Now? I watched this for the first time over Christmas, back when 'global plague' was only in like the top five things that might bring society to a crashing halt. If there was ever a moment for apocalypse dramedies to really kick off this is it and it is up there with the good ones. There are two very valuable lessons to take away from it as well. One, self-isolate, otherwise you might find yourself married to Will Forte and shitting in a pool. Two, isolation makes people crazy. Call ya mum. Check in on your mates.

Available On: SBS On Demand

Why Binge Now? I know I’m a "full-grown adult" and this is "for children" or whatever, but Bluey is for real life delightful. My mate’s ankle-biter would not shut up about it, but that dude also thinks eating dirt is cool so I ignored him at first. After watching a chunk of it with him it, I’m ashamed to say I was forced to eat my own words. Which is still better than dirt, you little dork.

Logline: In some ways, No Activity, a Stan Original Series about two detectives on a stakeout, is Australia’s answer to Seinfeld. The banter between Patrick Brammall and Darren Gilshenan is comedy gold and it didn’t take long for No Activity to gain global attention. In 2017 it was announced that Will Ferrell’s Funny Or Die was developing a version for the US (although the Aussie version is still the best).

Why binge now? It’s a window into the future – how your conversations with long-time friends might devolve into hilarious madness when you’re stuck in confined spaces for extended periods of time.

Nirvanna The Band The Show

Logline: Through a series of ridiculous schemes, best friends and roommates Matt Johnson and Jay McCarrol, aka Nirvanna The Band, try to get a gig at their local venue. Each episode of Canadian cult hit comedy Nirvanna The Band The Show parodies a different TV show or film and nothing seems to go to plan, which is great. Rick And Morty co-creator Justin Roiland described it as “one of the best shows ever made”, while it’s also won over Kevin Smith (who makes a cameo), Stranger Things’ Finn Wolfhard and more.

Why binge now? If you want to see what happens to a person after extensive isolation, look no further than Matt Johnson and Jay McCarrol. After two seasons, its third season is currently stuck in limbo, thanks to the demise of Viceland in 2018. If we all stream it on repeat, perhaps it’ll get picked up by another network.

Available on: SBS On Demand

Logline: They’re doctor cops (or cop doctors - even they’re not sure of what to call themselves) that go from being regular doctors at their hospital to heading all around the world like it ain’t no thing chasing down the mastermind behind a deadly virus as well as a cure. A creator’s name you’d probably most recognise is Rob Corddry (who brings back his Children’s Hospital character in this "totally not a spin off" to said show) but also on their past credits is Wet Hot American Summer. Look for fun big name cameos including the likes of Henry Winkler, Joel McHale and Jon Hamm amongst others.

Why binge now? It’s about a virus, so duh, but it’s gloriously silly. Like, the type of jokes you think shouldn’t be funny, but you laugh at them anyway. Any amongst all the heaviness right now, we could do with a laugh at that subject matter, right?

Logline: Two best friends find themselves living in a Tasmanian town; one back living with his mum and the other fleeing a marriage, navigating small town life.

Why binge now? A simpler life in a rural Tasmanian town sounds like the life amongst all that's going on, doesn't it? Plus the talents of writers/stars Celia Pacquola and Luke McGregor have made a show that's as funny as fuck. I never knew subtlety could make you laugh so much.

Top Of The Lake

Logline: Season one follows detective Robin Griffin (Elisabeth Moss; Mad Men, Handmaid’s Tale) in New Zealand investigating the disappearance of a 12 year old girl. While it initially presents as a crime drama, it also explores what it means to be a woman at the mercy of men. It is tough to watch at times but it is highly compelling. If you make it through season one and want to keep watching then season two is absolutely worth checking out as well, it explores themes of motherhood within the crime drama framework. Directed and created by Jane Campion and Gerard Lee.

Why binge now? Sometimes it’s good to distract yourself from the world’s current trauma with a whole different kind of trauma. It’s gritty, the performances are excellent, it’s local and oh yeah, it’s stunning. First season is in New Zealand and my gosh are the landscapes beautiful! Plus the cast is incredible, I’ll drop a couple of the big names: Holly Hunter (season 1), Nicole Kidman and Gwendoline Christie (Season 2).

Logline: A group of four people find themselves in the afterlife. They are told it’s The Good Place and what follows is a show about moral philosophy and what it means to be good. While at times the show is light and fluffy, it is often poignant and existential. Starring Ted Danson (Cheers), Kristen Bell (Veronica Mars), Manny Jacinto, D’Arcy Carden, Jameela Jamil and William Jackson Harper. Written by Mike Schurr (Parks & Recreation, The Office).

Why Binge Now?: In these strange times where people may be displaying their worst traits, this show reminds you that people can change for the better and we owe people that chance. Also it’s hilarious and if you don’t love Janet then maybe you don’t deserve to go to The Good Place.