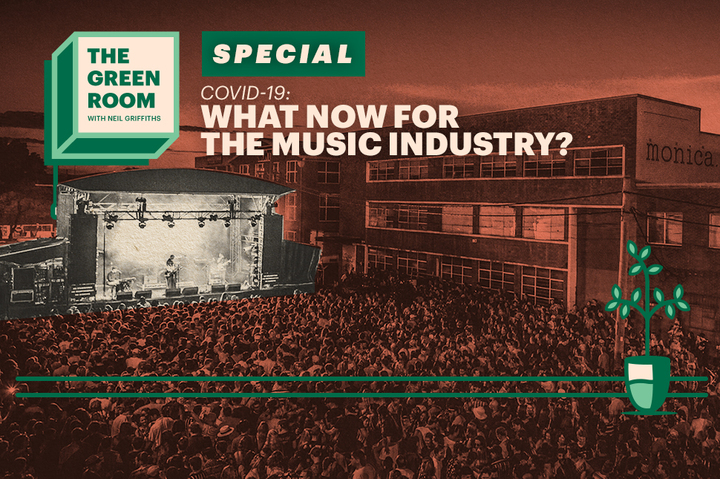 Shows, tours and festivals have continued to be called off in the wake of the global coronavirus crisis.

While some major festivals including Download Festival, Bluesfest and Groovin The Moo have been cancelled, as well as Splendour In The Grass being rescheduled, Prime Minister Scott Morrison has implemented a ban on outdoor mass gatherings of over 500 and indoor gatherings of over 100, effectively shutting down the live music industry, which has seen a reported income loss of $100 million already.

In this special episode of The Green Room podcast, host Neil Griffiths speaks with a number of key figures within the local music industry about the impact COVID-19 has had so far and will continue to have, support required by the Federal Government and what Australian music fans can do in this time of crisis.

"The people that I employ, their income is at the mercy of what the artist makes. If the artist isn't making anything, then the system collapses."

"Things are changing minute to minute and hour by hour... at the moment, it's trying to get as much information as possible to get through this period which we don't know how long will be."

"This will continue on for some time. We're all trying to think about the short term, medium term and long term solutions to this."

JOHN 'JC' COLLINS - OWNER OF THE TRIFFID, CO-OWNER OF THE FORTITUDE MUSIC HALL VENUES IN BRISBANE

"I can't tell you how much of an impact it's had. There's no revenue. We're not making any money."

"I understand exactly why the Government's made the decisions they've made in terms of social distancing. But how they didn't think that the package they put forward needed to deal with people whose entire livelihood is based on people gathering is just beyond me."

"I would rather take a very swift short term kick in the nuts then a long term castration. I'd rather do that now. I think everyone should just go into lockdown."

Stream the full episode on Spotify, Apple Podcasts (below) or your favourite platform to listen to podcasts.