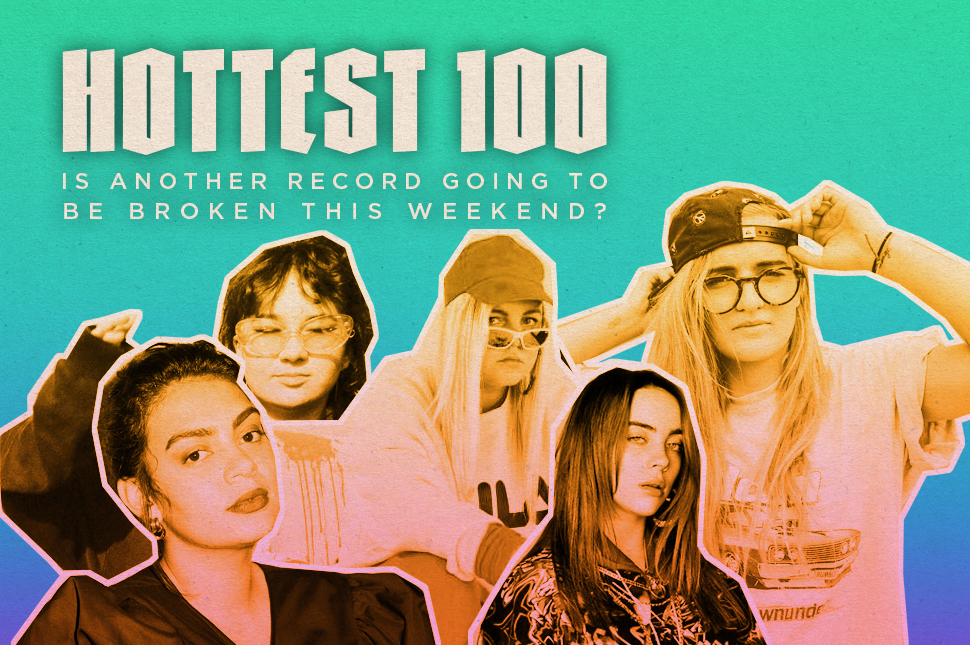 This week's Hottest 100 result could be a record-breaker.

While there's a pretty big chance that US artist Denzel Curry could have the highest voted Like A Version track ever with his take on Rage Against The Machine's classic Bulls On Parade, it's also likely that another record could be made.

2019 could be the first time that a woman solo artist comes in at #1 on the countdown. It could also be the year that has the most women ever featured in the top 10.

According to Warm Tunas' predictions, it's possible that the countdown could have a total of five solo women artists in the top 10 and a further three appearing in either groups or as guest vocalists.

Obviously the predictions are not 100% so there's still a good chance for a female artist to top the list, especially US artist Billie Eilish who is currently predicted for #2 with bad guy. See the current predictions below.

The Hottest 100 has had an interesting history; the first countdown in 1989 - which focused on songs from any year - had only two women feature in the top 10 (The Sugarcubes' Björk and Margrét "Magga" Örnólfsdóttir).

The following year had three (New Order's Gillian Gilbert and The B-52's Kate Pierson and Cindy Wilson). Gilbert was the only women to feature in the top 10 in 1991.

In 1993, when the countdown shifted to songs from the previous calendar year, The Cranberries came in at #3 with Linger while The Breeders' Cannonball hit #5. The Cranberries, with frontwoman Dolores O'Riordan, topped the 1994 countdown with Zombie.

1996 saw Spiderbait the top spot with Buy Me A Pony becoming the first Australian track to hit #1. It would also be the last time a woman would feature in the #1 track until 2010 when Angus & Julia Stone took it out with Big Jet Plane.

The run continued in 2011 however, with Gotye's Somebody That I Used To Know featuring Kimbra hitting #1.

Canadian artist Kai is the most recent woman to appear on a #1 track - Flume's Never Be Like You - which topped the chart back in 2016.