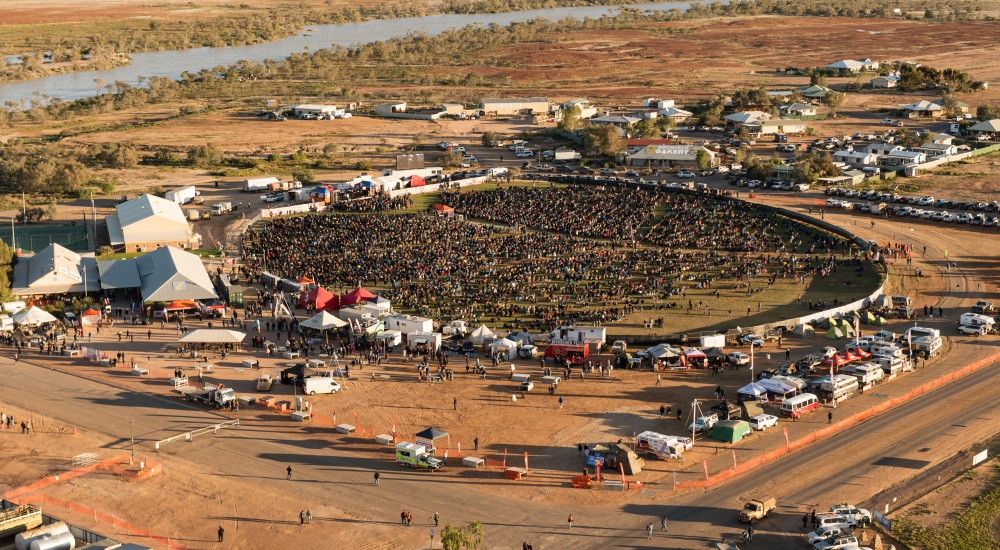 Despite the sudden change in location, for three days the tiny outback town of Birdsville in Western Queensland was in full swing, with over 7,000 people from every state in Australia descending upon the town for the outback music festival of the year - the fourth annual Birdsville Big Red Bash.

The crowd was blown away by Aussie rocker Jimmy Barnes, as he returned for his second year at the Bash, belting out crowd favourites such as Khe Sahn, Working Class Man and Driving Wheels.

"It was amazing to be part of this event for the second year in a row. Nothing compares to rocking out in the desert with so many people - it's been such a powerful experience," Barnes said.

Paul Kelly, with his family in tow, made the trip out to Birdsville to headline his first year at the Bash, performing some classics such as From St. Kilda to Kings Cross, To Her Door and From Little Things Big Things Grow. He described the experience as extraordinary. The line up for 2016 was the biggest ever with a number of iconic Australian artists travelling to perform at the sold out festival, including Troy Cassar-Daley, Christine Anu and Shane Howard.

Adam Harvey and Russell Morris were crowd favourites as well as Aussie rock band The Angels. Wilbur Wilde was the MC for the festival, entertaining concertgoers with his comedic routine. The family-friendly event welcomed people of all ages, including over 600 families and 1200 children, travelling from all over the country to set up camp in the small outback town of Birdsville. While the campsite atmosphere was electric, the festival area was spectacular, with concertgoers singing and dancing along to famous Aussie anthems such as Great Southern Land, Solid Rock and Under The Milky Way.

Festivalgoers put on their best Priscilla Queen of the Desert outfits for the Bashville Drags and Fashions in the Desert, which raised funds for the Royal Flying Doctors Service. Other performers who kept the crowd entertained over the three days included Col Finley, Adam Brand and the Outlaws, Glen Shorrock and Brian Cadd. 4WDing and caravanning enthusiasts travelled to Birdsville for the uniquely Australian three-day concert, with many citing the journey and the destination as one of the main drawcards.

"Coming from Brisbane, a three day ride on my motorbike, I experienced so much of our beautiful country along the way - expanses of red dirt, dense scrubs and gibber plains. On top of that I am so lucky to have the opportunity to rock out to such amazing Aussie artists!" said Craig Cameron.

Event organiser, Greg Donovan of Big Run Events, was thrilled with the outcome of the event. Despite the logistical stress of relocating the festival, which was overcome using the expertise of the seasoned event operators, the event was exceptionally well received by ticketholders.

"It was so amazing to see everyone get on board with the changes to the event and create an electric atmosphere in the town itself. Now that the event is done and dusted, the crew can knock off and enjoy a well-earned beer at the Birdsville Pub," said Donovan.

"We can't wait to see everyone back in Birdsville for the 2017 Bash and are looking forward to taking the event back out to Big Red next year. Put the 4th - 6th July in your diaries and stay tuned for more details."

Together, the Big Red Run, a six-day 250km ultra-marathon across the Simpson Desert just prior to the concert, and the Birdsville Big Red Bash, have raised over $800, 000 for Type 1 diabetes research since 2013.
Share: