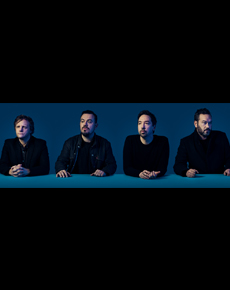 Buy Tickets
Shihad return to Australian stages this June and July for the first time since their FVEY tour in 2014, joined on the WA leg by cult Australian three-piece, Perth legends Storytime!

In 1996 Shihad released what many consider to be their break through album; the Self Titled opus that became affectionately known as The Fish Album (in reference to the album cover image). Now in April 2016 The Fish Album is re-mastered and re-issued both digitally and on vinyl. Evolving from the semi industrial Churn (1993) through the heavy riff laden Killjoy (1995), the Fish album bristled with a new found lightness of spirit as it collided with the maturity of a band fulfilling their potential as writers and incendiary live performers.

Finding a home with labels internationally Shihad toured the Fish Album around the globe relentlessly. Songs such as La La Land, Ghost From The Past, A Day Away and the breakthrough single ‘Home Again’ burnt into the consciousness of rock fans from New Zealand to Germany where the band based themselves for a good portion of ‘96 and ‘97.

In 2015 Shihad demonstrated with the release of their ninth studio LP FVEY, that are far from done, attracting glowing reviews “Shihad are well and truly back and have taken an unlikely turn to produce what might just be the best album of their 26 year career.” Fasterlouder, spawning the fierce single ‘Think You’re So Free’ and confirming their position as one of the hardest hitting, durable acts of modern rock n’ roll.

There aren’t many bands that endure with such a cache of riches while continuing to demonstrate a surging hunger to evolve and perform. After twenty-eight years together, they just keep getting better, delivering LP’s and live shows with an intensity that leaves their younger contemporaries for dead.

Storytime earned their place as legends on the West Coast throughout the '90s, captivating a generation with dark, multi-dimensional instrumentals. Setting the imagination ablaze with a combination of beautiful melodies, irresistible grooves and simple evocative titles; a Storytime song could teleport itself from Pink Floyd-like ambience to an indescribable musical futurism in the blink of an eye.

The band’s unique brand of cinematic instrumentals was embraced by the surf community on a global scale: featuring on more surf movies in the '90s than any other band on the planet. And then, after just three albums, Storytime were gone.

Reuniting in 2016 - and featuring the original lineup of Ben Frichot on guitar, Sid Sanbrook on bass and Simon Cribb on drums - Storytime will be performing songs from Crystal Journeys and The Puzzleman plus some new tunes to be unveiled along the way. The band's guitarist, multi award-winning musician and artist Ben Frichot, says the trio are excited about the reunion and jokes that despite the music being 'harder to play than they remember', the band have picked up where they left off and will be giving fans the authentic Storytime experience.