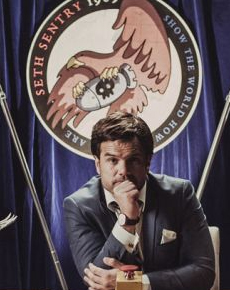 Buy Tickets
Aussie hip hop star Seth Sentry has suited up for his national 1969 Campaign Trail Tour, hitting the road from this June, and has just dropped a film clip for the sojourn's titular track, 1969, off last year's acclaimed full-length Strange New Past.

The in-demand artist will take his new show of presidential proportions to 16 venues across the country and will aim to match the intensity, if not size, of his massive 50-show tour last year.

Sentry will be joined by Melbourne rapper Remi - who appears on Strange New Past track Nobody Like Me - on the tour for all shows, kicking off at The Racecourse Hotel in Ipswich on 30 June, continuing throughout July and August to stages in Brunswick Heads, Brisbane, San Remo, Melbourne, Geelong, Sydney, Canberra, Wagga Wagga, Darwin, Adelaide, Launceston, Hobart, Bunbury, Perth and Margaret River. More special guests will be announced in the coming weeks.

Coming off the back of his AIR Award win for Best Hip Hop Release and ARIA Award for Best Urban Release, as well as a string of summer festival appearances, Sentry is all set to hit the hustings and fight the good fight for hip hop.

Tickets for all shows will go on pre-sale from next Tuesday, 26 April, before opening up for general release from Wednesday 27 April. See Sentry's website for further details.