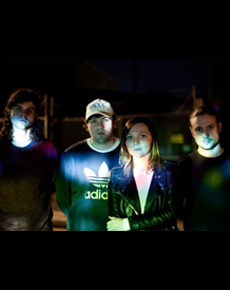 Buy Tickets
Sydney electro-pop quartet A.D.K.O.B have just released dates for a string of headline shows throughout May and June following the release of Ghost, the last single off their debut EP, A Different Kind of Busy.

Since their induction into the limelight with their first single Glue mid-2015, they continue to demonstrate creativity and maturity as a band. The film clip for Ghost was even directed and produced by drummer Harry Simpson.

Having nabbed support slots for the likes of Sticky Fingers and Bad//Dreems as well as winning the triple j Unearthed spot for Sydney's Laneway Festival this year, the band will also take to the road in supporting the mesmerising Montaigne on her In The Dark Tour this April, kicking it off tonight at Howler Bar in Melbourne.

A.D.K.O.B will begin their Ghost tour at the Moonshine Bar in Manly 26 May (a free show), The Brightside Bar in Brisbane on 27 May, The Basement in Canberra on 10 June, Brighton Up Bar in Sydney on 11 June, Beach Road Hotel Bondi on 15 June (another free show), RAD Bar in Wollongong on 23 June, The Lass O'Gowrie in Newcastle on 24 June (yet another free show) and Melbourne's Worker's Club on 2 July to finish off.