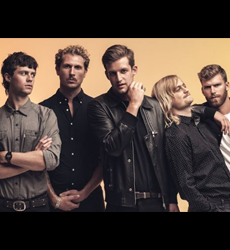 Buy Tickets
Having sold out the first Brisbane show on their upcoming Hold Me Back Tour, The Rubens have announced a second and final all ages show on Friday 10th June at the Eatons Hill Hotel with Mansionair and Slum Sociable along as support.

Taking out the triple j Hottest 100 at the beginning of the year with their track Hoops, the band have wasted no time in celebration (well except for this grin inducing moment), setting themselves up to hit the road as hard and fast as they’ve hit back at critics including Steve Kilbey of The Church.

With their biggest headline tour to date imminent, the momentum behind the boys doesn’t look to be letting up anytime soon. Word of their live show has spread so fast, all the other shows on the tour are also on track to sell out.