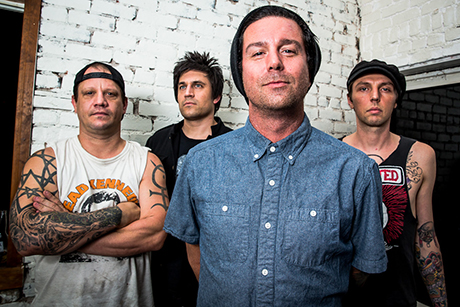 '90s alt rockers Unwritten Law haven't forgotten about you, Australia. The Californians have announced they'll be returning this December bringing along none other than Adelaide stalwarts Grenadiers along for the ride.

Having released six albums in their time, their last being 2011's Swan, Unwritten Law are eager to bring an array of hits from all across their catalogue to Aussie stages - expect to hear Celebration Song, California Sky, Holiday and She Says, among many others.

Grenadiers, on the other hand, will have their most recent offering Summer in tow, and will join Unwritten Law on all dates.

The eight-date tour will kick off in Adelaide at Fowlers Live on Thursday, 3 December, before the band head to Coolangatta, Brisbane, Melbourne, Newcastle, Central Coast, Sydney and Perth. It's a whirlwind tour - eight shows in ten days - but punters won't be disappointed to see the boys hit up some smaller cities while they're here.