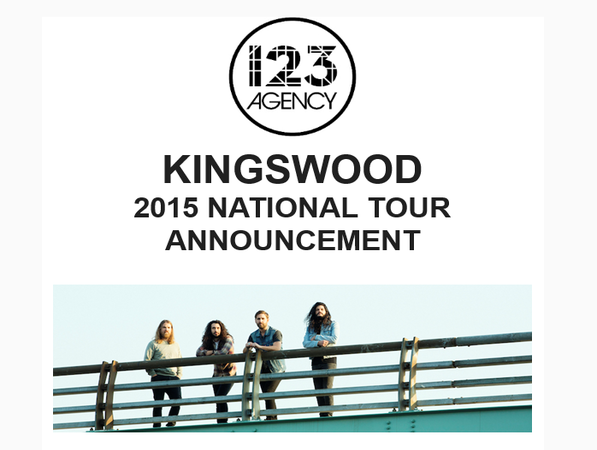 With their signature rock 'n' roll swagger and unstoppable quest for greatness ARIA Nominees, Kingswood were never going to be content staying home for the summer. Faster than a thundering bass line and bolder than a crescendo of drums, the band have announced a huge nation-wide tour, from iconic capital city venues to taverns' off the beaten track to an all ages show part of the Mordialloc Food Wine & Music Festival, starting on January 22nd.
There's been nothing small about the Melbourne band since their inception, and certainly not since their debut album 'Microscopic Wars' was released earlier this year. The album Storming into the ARIA charts top ten, invading triple j with their singles 'ICFYDLM' and 'Sucker Punch' added to high rotation, as well as releasing film clip 'MICRO WARS' that draw on Tarantino-like blood splatters and Shakespearian love affairs for inspiration and provide a perfect vision for their cinematic and sprawling sound.
WHAT CRITICS ARE SAYING ABOUT 'MICROSCOPIC WARS'
'It's been a solid journey of musical growth for the Melbourne band one which has captured fans across the country thanks to their dark and driving take on rock, and Microscopic Wars is a true testament to that' - triple j.
'Kingswood, who much like their name automobile - trade in growling, rumbling, petrol-guzzling power.' - Blunt Magazine
'If rock and roll is indeed fading away, thankfully nobody has told Kingswood, who seem intent on embarking on a one-band mission to put it back where it belongs.' - mX
'If the little tastes we've had of Kingswood were enough for us to take an interest in the band, 'Microscopic Wars' will make us fall in love with them.' - KILL YOUR STEREO
Tickets On Sale Now!