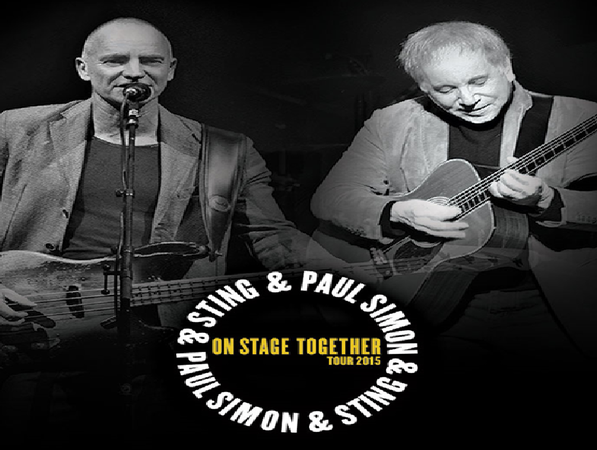 Sting & Paul Simon, two of music's most renowned and enduring artists, will bring their critically-acclaimed On Stage Together tour to New Zealand and Australia in 2015.

Tickets for all performances are on sale now with new tickets priced from $99.90 - which were previously sold out – just released for all Live Nation produced shows.

As exemplified on their North American tour earlier this year, the concerts will feature these two iconic singer/songwriters on stage together, blending their voices, trading songs and intertwining their bands while performing their best-known songs.

On stage for more than two hours, Paul Simon and Sting perform hits and fan favourites from their staggeringly rich repertoires, such as Sting's Brand New Day, Fields of Gold, Fragile and Every Breath You Take; and Simon's 50 Ways to Leave Your Lover, You can call me Al, The Boxer and Boy in the Bubble.

Joining the tour at all Australian winery shows will be singer-songwriter Sarah Blasko.

Sarah Blasko has released four studio albums, the latest I Awake preceded by her three platinum-selling works The Overture & the Underscore, What The Sea Wants, The Sea Will Have and As Day Follows Night. She has received numerous accolades including 14 ARIA Award nominations and wins for Best Pop Album and Best Female Artist along with triple j's 2009 J Award for Australian Album of The Year.

Tickets for all shows are on sale now. For complete tour and ticketing details, visit: www.livenation.com.au