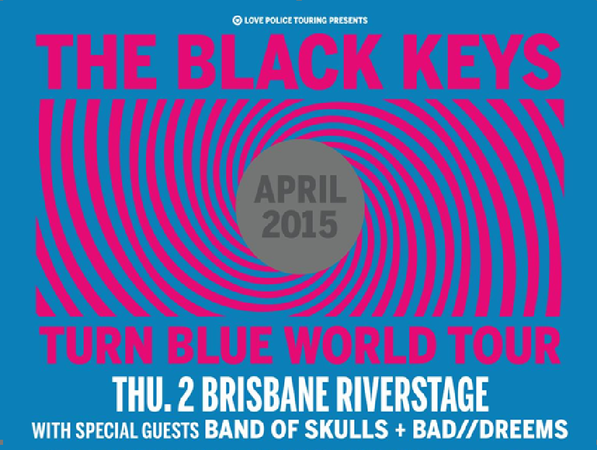 Love Police Touring are pleased to announce the Grammy-winning duo of Dan Auerbach & Patrick Carney, known as The Black Keys, will return to Brisbane as a part of their Turn Blue World Tour. The band will kick off the Australian leg of the tour at the Riverstage on Thursday 2 April, 2015 with special guests Band of Skulls and Bad//Dreems, making this one rockin' line up to get the Easter long weekend started!

This will be the 8th tour to Australia for The Black Keys who are currently receiving stellar reviews on the North American leg of their epic Turn Blue World Tour.

'So long as the Black Keys are on the road, there's hope for the future of guitar-based rock 'n' roll' - Ottawa Citizen

their oft-rudimentary thud is sexy and sweaty and impossible to resist - try not to bop along to 'Gold on the Ceiling,' 'Dead and Gone,' and 'Lonely Boy,' especially live, where they sound raw and direct.' - The Grand Rapids Press

'proof that though the venue has changed, the Keys aren't too far removed from those early basement explorations' - Columbus Alive

The band's dynamic set has been described further by Ottawa Citizen as a 'sweet ride' featuring something for everyone, including all the big hits, new tracks from Turn Blue plus a selection from every release of their back-catalogue. You might even get the odd cover thrown in as well. The UK's Guardian said of the band's Glastonbury 2014 performance, 'The Black Keys have got better as they've got bigger, revealing a talent for fiendishly catchy classic rock.'

Check out some of the highlights from the North American leg of the Turn Blue World Tour along with The Black Keys talking about the Turn Blue touring experience below:
Tickets On Sale Now!