THE AMITY AFFLICTION
'The Weigh Downunder' 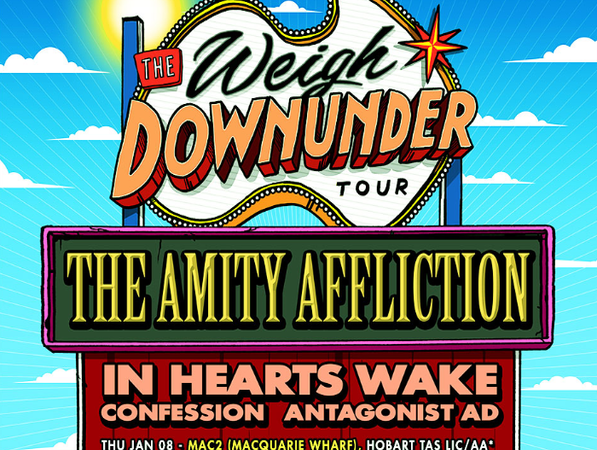 The Amity Affliction have announced 'The Weigh Downunder' Tour which will reach regional and suburban centres around Australia throughout January including Tasmania, North Queensland, Northern Territory, Western Australia and the East Coast. Joining them on the tour will be In Hearts Wake, Confession and Antagonist AD.

The Amity Affliction released their acclaimed fourth studio album Let The Ocean Take Me (via Roadrunner Records) in June, announcing a worldwide headline tour in support of the album. They sold all 25,000 tickets to their five date Australian tour, and have already sold out shows in Los Angeles, San Diego, New York, Toronto and more as part of their 30 date North American headline tour. In November the tour will take them throughout the UK and Europe, where their 800-capacity London show has already sold out. All in all, the 57 date headliner run will finish just before Christmas, leaving the hard working band just a short break before they head out on yet another huge run.

Let The Ocean Take Me was The Amity Affliction's second consecutive #1 charting album in Australia, and their third consecutive album to be certified Gold after the success of Youngbloods (2010) and Chasing Ghosts (2012). After their 2010 breakthrough, Amity toured to the far corners of Australia later throughout their Youngbloods album cycle. With an intense worldwide schedule since, they have played shows around regional Australia as part of Groovin' The Moo and headline slots on Bass In The Grass, Breath Of Life and River Sessions. 'The Weigh Downunder' tour will be their first headline run in these areas since 2011. The tour will also be in support of their new single and video for 'The Weigh Down', the third single from Let The Ocean Take Me.

The tour will make a special stop at Tarwin Lower where The Amity Affliction will headline the inaugural UNIFY Gathering which showcases the countries best heavy artists.

Along for the ride will be In Hearts Wake, who have been on a huge role since the release of their second album Earthwalker in May, which debuted at #5 on the ARIA Charts and has launched the Byron Bay youngsters worldwide. This will be the third tour that In Hearts Wake have supported The Amity Affliction on, after runs in the UK, Europe and Australia in 2013. The title track from their breakthrough album features The Amity Affliction frontman Joel Birch.

Confession will join the package in support of their recent album Life and Death. As long term friends of the Amity boys, this will be their first major tour together since the Youngbloods tour in 2010. Confession will follow the dates with their second appearance on Soundwave Festival. Rounding out the bill will be Auckland-via-Melbourne hardcore band Antagonist AD, whose new album will be released on UNFD in December.

'The Weigh Downunder' Tour will be on sale on Thursday October 16. Fans wishing to purchase tickets early can sign up for the super-fan pre-sale tickets at theamityaffliction.net. These tickets will be available from Tuesday, October 14 and each person who purchases them will go in the running to win a merchandise prize pack valued at $200. .
Tickets On Sale 16th October!