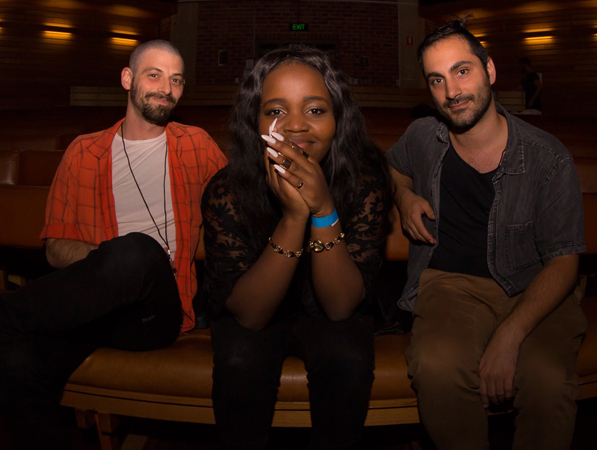 As difficult as it is to believe, Bluejuice actually have friends.

Some of these friends exist only in the band's imagination; like Carlos the woodland sprite, who lives at the bottom of their costume bag eating fungus, or Knifetopus the knife-wielding octopus, who sits on Jake's shoulder and whispers to him in a harsh and mysterious tinnitus-based language.

Bluejuice also have a number of real-life friends, and some of these friends play music. In order to make sure Bluejuice are farewelled in style, these pals will join the boys on certain dates on their final tour. The tour kicked off last night in Adelaide with hip-hop's high hopeful Tkay Maidza as their special guest. As the farewell spectacular rolls nationally you'll be able to catch Thelma Plum, The Aston Shuffle, Tyler Touche, Tkay Maizda, Deep Sea Arcade, and The Love Junkies all opening for the guys as their mystery supports. In addition there is a petition going around for their celebrity friends in Art V Science and maybe the The Jezabels and others to jump up for various encores. As to who's playing where... well that will remain a mystery for the lucky ticket holders on the night!

In addition, Jody, who are Bluejuice's new favourite Inner-West mope rock band will be opening all dates (excluding WA and North QLD), so make sure you arrive early. Or check them out first.

All tickets are 100% sold out in Sydney, Brisbane, Perth, Adelaide and Melbourne (apart from the under 18's show in the afternoon Oct 10th at the Hi Fi). So if you have missed out then you will need to pack the car for a road trip to a city that still has tickets left being Maroochydore, Coolangatta, Byron Bay, Mulgrave, Geelong, Wollongong, Canberra, Newcastle, Mackay, Townsville and Cairns.

And their hugely anticipated greatest hit record 'RETROSPECTABLE' is being released Friday September 26th. Includes new single I'll Go Crazy + ten years of Bluejuice indie anthems including Vitriol, Act Yr Age and Broken Leg. Join the movement #bluejuicetothetop and spread the love and champion the record to the top of the charts as the band finally heads out the back door!! Order the album at your local record store or pre-order via iTunes. .
Tickets On Sale Now!