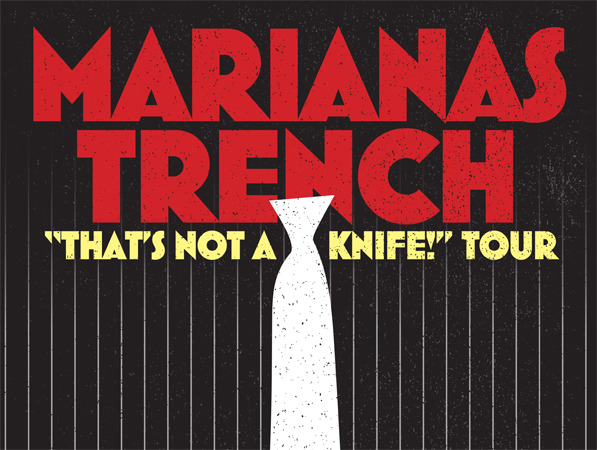 Live Nation is proud to present Canadian pop-rock quartet MARIANAS TRENCH, returning to Australia - as well as visiting New Zealand for the first time - for a set of headline shows off the back of their new single 'Pop 101' this November.

Marianas Trench will begin their tour in New Zealand at Auckland's Tuning Fork on October 30 before heading across to Australia for dates in Melbourne, Brisbane and Sydney before winding up at Perth's Astor Theatre on November 6.

Tickets for all shows go on sale at 10am on Thursday September 18.

My Live Nation members can secure tickets first during the pre-sale beginning at 2pm on Tuesday September 16. For complete tour and ticketing details, visit: www.livenation.com.au.

Vancouver-based rock band Marianas Trench is the brainchild of vocalist and guitarist, Josh Ramsay. Having firsthand exposure to the rock stars of the 80s - when Aerosmith and AC/DC recorded in his father's studio, while his vocal coach mother toured with Leonard Cohen - Ramsay began writing and crafting music from an early age.

Their debut album 'Fix Me' was released in 2006, followed by 'Masterpiece Theatre' in 2009 featuring homeland hit singles 'Cross My Heart', 'All To Myself', 'Beside You' and 'Celebrity Status'. After the band's third studio album, 'Ever After' (2011) reached platinum status in both Canada and the USA, they delighted packed houses of Australian fans during their debut headline tour in 2012.

This Autumn Marianas Trench released a deluxe version of 'Ever After' including brand new exclusive material, as well as their latest single 'Pop 101' which has been dominating airwaves and the digital landscape of North America.