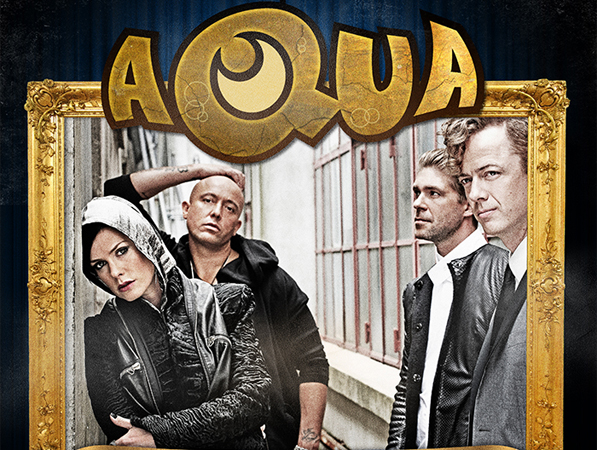 Danish pop stars AQUA return with their amazing live band to deliver all the massive hits that have made them a household name across the globe. With rave reviews and a string of 11 sold out shows across the country in 2012, Australian lovers of 90's pop have another chance to relive some of the biggest moments in pop history!

In 1997 AQUA owned the airwaves and indeed the upper reaches of the charts across the globe with a string of massive pop hits. Songs including the smash hits Barbie Girl, Doctor Jones and Lollypop (Candyman) had the world dancing to some of the most loveable feel good pop music ever recorded. In Australia AQUA both won and left an indelible imprint on the hearts of pop loving fans across the country, as clearly shown by their phenomenal sold out 2012 tour.

Claus Norreen and Soren Rasted started writing together in 1989. The pair then met keyboardist Rene Dif after hiring the musician to come and work on a soundtrack that the pair had won a competition to produce. After sensing that the trio shared an amazing musical chemistry it was decided they would work together on future projects. On seeing vocalist Lene Nystrom singing on the Norway–Denmark ferry Dif knew that he had found a vocalist to work with the newly formed trio and AQUA's first incarnation as Joyspeed was born.

As the band began to develop their trademark bubblegum dance pop sound they renamed themselves AQUA and landed themselves a record deal with Universal Music Denmark, it was this union that lead to the band's debut release under their new name. The release of their debut album Aquarium signaled that AQUA had arrived and their journey into the pop stratosphere began in earnest on release of their biggest hit Barbie Girl.

Barbie Girl went on to be a super smash hit landing number ones for the band in the UK and Europe, and a top ten on the Billboard Hot 100. In Australia Barbie Girl remained at the very top of the ARIA charts for three solid weeks. More success followed with the singles Doctor Jones, Lollypop (Candyman) and Turn Back Time, cementing AQUA's place as one of the biggest acts of the 90's.
Tickets On Sale Now!