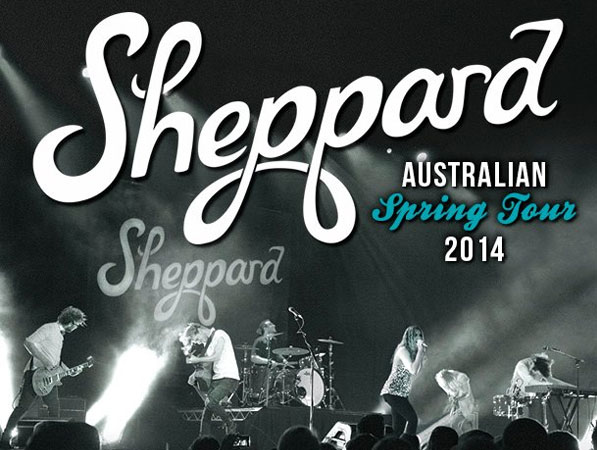 With the highest selling Australian single for 2014 under their belt with "Geronimo" and following four stellar album launches, Sheppard headed to Europe in July for the first steps in their journey towards a global hit and return with an impressive story to Australia for October for a run of live shows.

Although they've toured internationally numerous times, this most recent trek has seen Sheppard hit the top 10 in Ireland, Italy and Poland with "Geronimo" becoming the third most played video in Spain and being added to major national radio in Denmark and Germany. In other territories, "Geronimo" has also hit the iTunes top 10 in New Zealand, Indonesia, Malaysia and The Philippines. The single is rising rapidly in the Mediabase US National Alternative charts, jumping from #107 up to #62 this week.

"The response in Europe was great. It was so much fun to go to countries where we were starting from the bottom again and winning over the fans one by one with our songs," said Amy Sheppard. "We are so pleased that we have the opportunity to duck home to see our Australian fans again before we head out to the states in November."

The Sheppard freight train is not slowing down as their world-beating 2014 continues. Sheppard's manager Michael Chugg is currently working with US co-manager Scooter Braun - planning their November trip for an assault stateside in September and October.

At a recent performance at Australia House in London, the band were surprised with plaques for QUADRUPLE platinum sales for their single "Geronimo" with the band's international label Republic/Universal stating in this week's US industry bible Music Week that they hope to "match the success Sheppard has achieved in their home territory."

The band's October tour of Australia will see them playing a handful of regions for the first time since the release of their now gold selling album "Bombs Away" as well as return visits to Brisbane, Sydney and Melbourne.
Tickets On Sale SEPTEMBER 8!