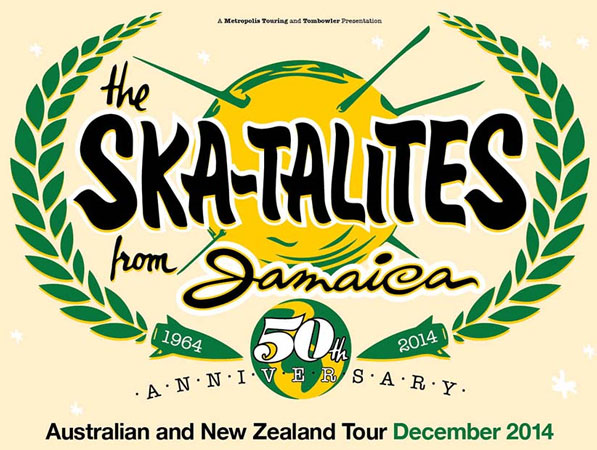 "The Skatalites are pure energy: hot like fire, with a scorching, skanking rhythm and big-band bravado." - Reggae Reviews.com

THE SKATALITES are heralding their return to Australia with the celebration of their 50th anniversary. It's rare that a band can boast of this milestone achievement but THE SKATALITES are more than a band; they are an institution, made up of a collective of some of Jamaica's finest musicians who not only defined the sound of ska in the 50's and 60's but influenced and inspired a number of generations and bands both on their own turf and around the world.

Named after a recently-launched Sputnik satellite in 1964, THE SKATALITES were officially together for only 14 months, but changed the shape of Jamaican popular music as chief proponents of the ska form, backing all the leading artists of the day, including a young Bob Marley, Alton Ellis, and Toots and the Maytals. Skatalites instrumentals such as Tear Up, (the original ska anthem), Guns of Navarone, (which also made the UK top 40), and Ball of Fire all topped the Jamaican charts.

After a hiatus the group reformed in the mid-80's to a new and embracing audience, including a world tour as Bunny Wailer's backing band and later for Prince Buster. An album of new material in 1993, called Skavoovee, cemented THE SKATALITES as true pioneers of the ska movement as the rest of the world was in the grips of ska fever thanks to bands like NO DOUBT, LESS THAN JAKE and THE MIGHTY MIGHTY BOSSTONES resurrecting the form. The band's constant world touring has seen generations of new fans captivated by the now-legendary musicians which includes 9 of the finest brass, sax, horn and string players as well as the first lady of Ska – original vocalist, Ms Doreen Shaffer.

Two step-dance moves, triumphant sax solos and huge smiles all help make THE SKATALITES show an experience. Lead singer Lester Sterling says "The crowd gets wild, the jump up and down, it's not sit down music!"

Two step-dance moves, triumphant sax solos and huge smiles all help make THE SKATALITES show an experience. Lead singer Lester Sterling says "The crowd gets wild, they jump up and down, it's not sit down music!"

Be part of the significant anniversary and the magic that crosses decades and generations!

"The Skatalites– that's why ska music is eternal." - The Vinyl District.com

"Skatalites are the epitome of roots music. The group is the genesis of an entire genre, not to mention the influence the band has had on ska, reggae and almost every other kind of popular music for more than 60 years now." - Popmatters.com
Tickets On Sale Now!