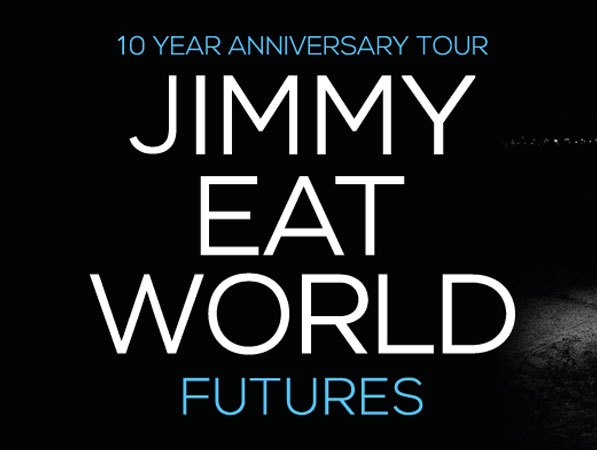 Frontier Touring are proud to be bringing Jimmy Eat World back to Australia and New Zealand this November in celebration of the ten year anniversary of their iconic album Futures' release.

After the band's appearance Down Under earlier this year for a run of very successful festival sets, fans have been hanging for more.

The Australian and New Zealand leg of the tour immediately follows a massive run of US dates in commemoration of the pivotal album. The Futures 10 Year Anniversary Tour will kick off in Auckland before crossing the ditch to visit all Australian capital cities and sees the band performing their pivotal album from front to back.

Futures, the band's fifth studio album, was released on 19 October 2004 and features some of the band's most iconic tracks including 'Pain', which has achieved Gold status in the US and became their second song to land the #1 spot on the Billboard Modern Rock Tracks Chart.

The album peaked at #27 on the ARIA Albums Chart in Australia and #6 on the Billboard 200, proving the band were still delivering the goods in album number five.

One of Jimmy Eat World's deepest and more emotive albums, Futures demonstrates the band's growth and maturity and their crafted abilities in invoking heavy themes in even the catchiest of tunes such as 'Work'. In contrast, tracks like '23', a perfectly building track with seamless production, highlight the raw and echoing lyrics by Adkins, making it a perfect closing track to Futures.

'Futures may be the deepest and most contemplative album in Jimmy Eat World's discography. It covers an entire spectrum of emotions, from the silver-lined opening track 'Futures'all the way to the heart wrenching closer, '23'. – 5/5 Sputnik Music

'Mixing maturity with a fixation with metal, there's an anthemic chorus to match every squiggly, air-guitar solo, and gentle harmonies play off grinding rhythms. It's the perfect combination for the ultimate pop-rock break-up album, and the singer-songwriter Jim Adkins jumps neck-deep into heartbreak. His lyrics are his strength.'- The Guardian

If the response to their last headline tour in 2011 and reaction from fans who were lucky enough to catch them earlier this year is anything to go by, the demand for these shows are going to be through the roof!
Tickets On Sale Now!