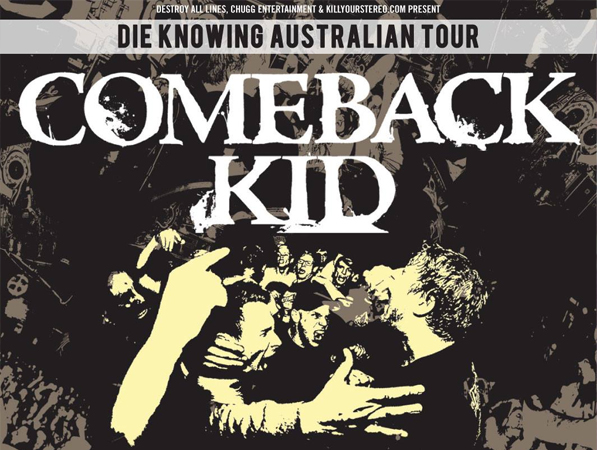 COMEBACK KID are an undeniable staple of the hardcore community. It's been 11 years since their debut album and with the release of their fifth record, Die Knowing, earlier in 2014, the Canadian quintet are gearing up to bring their new stuff back to Australia this October for their ever growing legion of fans.

Taking influence from their contemporaries in the scene as well as the 90's skater punks and the more melodic acts out there, Comeback Kid have created a sound all their own within the often times cookie cutter hardcore genre. Experimenting with and incorporating new musical elements from beyond the confines of modern hardcore has stood them apart from everyone else.

It's the bands intensity and attitude on the stage that really connects with their fans however, conveying raw emotion and a genuine love for what they do. Vocalist Andrew Neufeld couldn't have said it any better "It's a good feeling that despite how long we've been doing this, we can still get so collectively excited about our music. We love doing this. There's no better feeling for any of us than being in a room, losing our minds, and watching others lose their minds with us."

Rotting Out create some of the most energetic and captivating punk/hardcore being played today. True LA natives, they were raised on a diet of Suicidal Tendencies and Pennywise and perfectly capture the soundtrack to skating, mayhem, hanging with friends and getting into trouble. The perfect appetizer ahead of the CBK onslaught!

Joining CBK and Rotting Out will be Sydney's Relentless. The band have defined themselves as one of the most straight up, no nonsense hardcore bands in the country, with comparisons to Madball and Sick Of It All. Having risen to the top locally, they have made solid in roads into South East Asia of late and are planning to spread their trademark style across Europe and the US in the near future.

With ten dates on the tour, everyone around the country has the opportunity to catch three bands in their prime. A monstrous night of hardcore, sweat and pure energy. Supports will be announced soon.
Tickets On Sale Now!