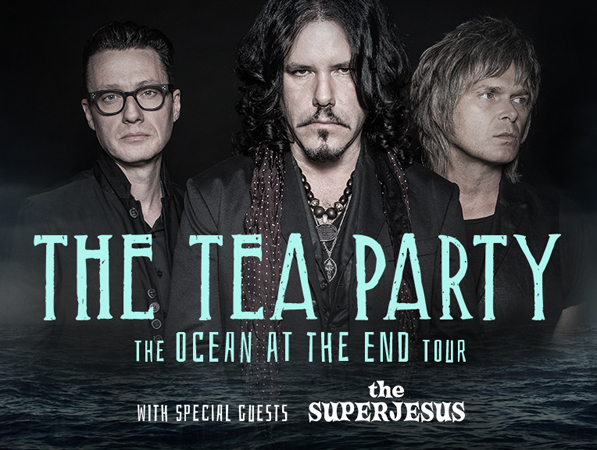 Canadian purveyors of rock THE TEA PARTY will return to Australia for a National Tour this October. The Ocean At The End Tour marks The Tea Party's fourteenth Australian visit and coincides with the release of the beast, that is, The Ocean At The End - the trio's first studio album in ten years.

Throughout The Tea Party's 2012 sellout Australian 'Reformation Tour', after 8 years apart, it was clear to see that the on-stage magic between Jeff Martin (vox/guitar), Stuart Chatwood (bass/keyboards) & Jeff Burrows (drums/percussion) remains as strong as it ever was. The reunion sparked a calling for the band to return to the studio and lay down songs for a new recording, much to the delight of TTP's longstanding devotees. On their eighth studio album, recorded through the Winter/Spring of 2013/14 at Toronto's Revolution Studios, Jeff Burrows says, "The writing for this record was as organic and honest as our first album. 3 friends, in a room with one goal in common, do what we do best. The result: 'The Ocean at the End'". Produced by Jeff Martin & mixed by David Bottrill (Peter Gabriel, Muse, Tool), The Ocean At The End is slated for release this September through Anthem/Sony Music Entertainment Australia and features the mammoth rock track, 'The Black Sea' (available early August through iTunes).

Following the release of The Ocean At The End, The Tea Party will take to the road to perform in selected Theatres & Clubs around the country. "There's nothing like touring Australia...the fans are unlike anywhere else on the planet. I can't wait to share the Rock & Roll communion," says Jeff B. Supporting the band on this tour will be none other than our own Aria Award winning Multi-Platinum rockers, The Superjesus. Reforming in 2013 after a ten yearlong break, the mighty foursome never fails to pack a punch thanks to their powerful live show and infectious rock anthems (Shut My Eyes, Gravity, Down Again and more).
Tickets On Sale AUGUST 1!