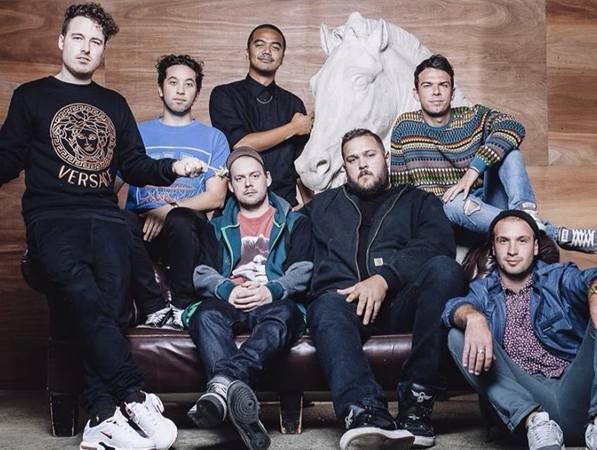 With the release of contagious new single Love Me Less, One Day, the crew comprising of Horrorshow, Spit Syndicate, Jackie Onassis and Joyride announce not just a song but an album by the name of Mainline and an extensive national tour.

One Day are arguably the most exciting hip hop collective in the country, ensuring their neighbourhood in Inner West Sydney is seen as one of the breeding grounds for the sharpest producers and MCs in local hip hop. Mainline is set to catch people by surprise with a painstakingly crafted album that draws on their individual successes to creating something new and unprecedented. This is no supergroup, this is a crew who've grown up together and share a collective vision to do some amazing shit.

Horrorshow have had an incredible 12 months releasing a ARIA #2 album King Amongst Many, selling-out the accompanying national tour and entering the Hottest 100 with their song Dead Star Shine. Spit Syndicate's lauded third album Sunday Gentlemen has seen their profile jump off the back of radio favourites Beauty In The Bricks and Amazing. Joyride's star is well and truly on the rise, leading to collaborations with Drapht, Ta-ku and Wordlife. Jackie Onassis stormed onto the airwaves with Crystal Balling and Smoke Trails, the duo then releasing their Juliette EP after airplay on BBC Radio 1 and US college radio.

One Day are launching Mainline in the biggest venues of their careers, playing individual sets followed by a collaborative finale with all seven members on stage together for the first time ever.
Tickets On Sale Now!