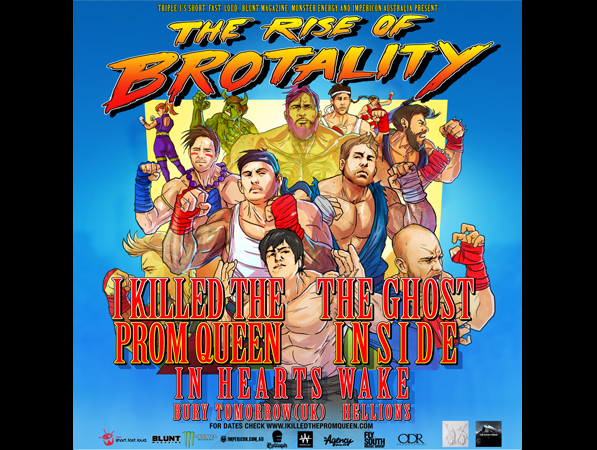 Synonymous with the forefront of punk rock for decades, Epitaph records is now home to the heavyweights of hardcore, and this September they're deploying two of their finest, The Ghost Inside and I Killed The Prom Queen to lead an assault on Australia & New Zealand's shores.

Squaring up to the burgeoning anticipation, I Killed The Prom Queen finally return home to tour their post-resurrection debut "Beloved", along with the best of their earlier works, still amongst Australia's best-selling heavy music. "Beloved is astonishing, from the production to the mind-boggling musicianship, if there is one band who will turn you onto this genre, it's these Adelaide brutalists" Rolling Stone Australia

Not to be outdone, California's The Ghost Inside come fresh from the studio with A Day To Remember's Jeremy McKinnon, promising more of the catchiest hardcore ever and showing exactly why their "Get What You Give" was awarded #3 on Short.Fast.Loud's best albums of 2012.

Completing the stellar line up is the best young blood Australia and the UK has to offer. Byron Bay's In Hearts Wake continue their meteoric rise and join the fray, on the back of their Top 5 Aria record "Earthwalker". Purveyors of a similar phenomenon on the other side of the globe, Bury Tomorrow make their first trip down under to dispense their own brand of hooks and heaviness that has propelled them to the top of the UK scene. Rounding out the tour is Sydney's Hellions plan to show audiences exactly why they were voted "Best Newcomer" in Blunt magazine in 2013.

Not content with Australia's common-place capital city whirlwind tour, instead the whole of September has been pledged to cover towns rarely included in a tour package of this standard. After igniting stages together across Europe and the United States for most of 2014, The Ghost Inside and I Killed The Prom Queen have hand-picked supports from the best of modern hardcore and are now heading south to infect crowds with the live energy they're both renown for.
Tickets On Sale Now!