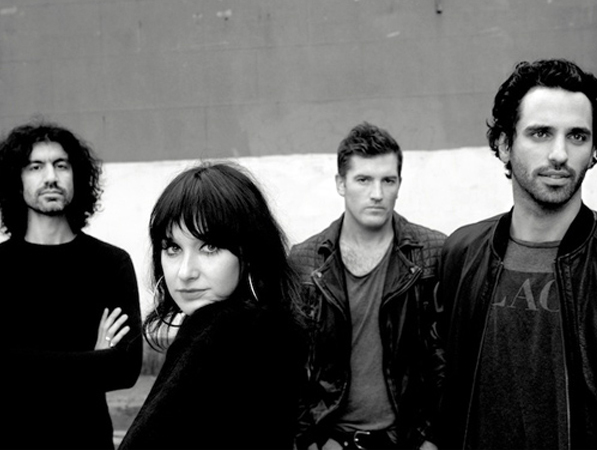 Forming in 2005, Sydney-locals Howling Bells relocated to London where they filled their sound with elements of Americana, ambient electronica and their deliciously dark brand of lyrics. They combine the honeyed vocals of front woman, Juanita Stein, lo-fi riffs from guitarist-brother Joel and the chest-banging beats of drummer Glenn Moule, all galvanised by the recent addition of London-born and bred bass player, Gary Daines.

Their latest album, Heartstrings, was written during a "creative spell" in the basement of Juanita's north London home last October and released earlier this month. It was recorded in London's Assault & Battery Studios almost immediately after its creation by Catherine J. Marks (Foals' Holy Fire, PJ Harvey's White Chalk) and under the watchful eye of legendary producer Alan Moulder (My Bloody Valentine, The Killers, Depeche Mode).

After a two-year hiatus between the release of 2011's The Loudest Engine and the recording of Heartstrings in Autumn 2013, there's a renewed energy within the band - critically evident throughout this new release. The time away has only strengthened their artistry and desire to get back on the road to share this album with their fans.

Howling Bells have always been a hard-touring band, and arena supports with The Killers and Coldplay only heightened their enthusiasm for reaching out to their audience. "I'm desperate to tour and connect with an audience again - there's no way for an artist to gauge people's reactions to a song unless you're playing them live," says front woman Juanita. "Twitter's not gonna do it, Facebook's not gonna do it, online comments aren't gonna do it. I need to feel them."
Tickets On Sale JUNE 19!