triple j, Blunt Magazine and Converse in association with Unified present
The Amity Affliction
The Let The Ocean Take Me Tour 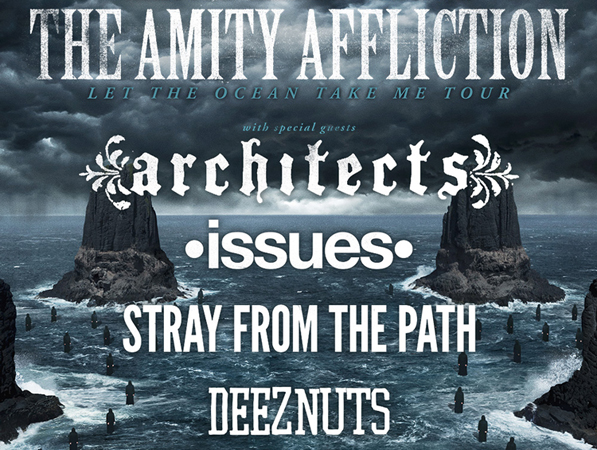 The Amity Affliction have announced their biggest headline tour to date, in support of their recently released smash hit album "Let The Ocean Take Me", which was released last Friday June 6. The tour will take in some of Australia's most iconic venues and will include support from some of the hottest heavy music acts in the world.

"Let The Ocean Take Me" is the 4th album by The Amity Affliction, and is the follow up to 2012's #1 & Gold Certified hit "Chasing Ghosts". The album (and it's lead single "Pittsburgh") has connected with fans across the world and has reaffirmed Amity's position as one of the most successful Australian acts in recent memory. Later this week they will announce a worldwide headline tour taking in venues across Europe, and North America.

The Let The Ocean Take Me Tour will be their first Australian dates of 2014. While their last three Australian tours saw them sell out multiple nights in each city, this time around the band will upgrade to their largest rooms yet including the iconic Festival Hall in Melbourne, Hordern Pavilion in Sydney and Red Hill Auditorium in Perth. They will also return for a third time to Brisbane's Riverstage, where they put on one of the most memorable heavy music performances ever seen in Australia in 2012 on their "Chasing Ghosts" Tour.

Along for the ride will be Architects, who hail from Brighton in the UK. The release of their recent breakthrough album "Lost Forever, Lost Together" saw them charting at #13 on the ARIA Charts, and created an unprecedented demand for them downunder. This will be their 5th tour of Australia and their first since 2012. "Lost Together..." was one of the most critically acclaimed heavy records of 2014 and was considered by most music critics and fans to be an early contender for Album of The Year upon its release back in March.

US metalcore act Issues released their debut album in February of this year, and shocked the music world by entering the US Billboard Chart at #9. Having taken the heavy music scene by storm so early in their career, it's no surprise that they will first tour on Vans Warped Tour as well as the Reading and Leeds Music Festivals before they jump on board the Let The Ocean Take Me Tour. This will be their first ever trip to Australian shores.

Stray From The Path made their first ever trip to Australian in 2013 supporting Northlane, and became an instant fan favourite. Hailing from Long Island, the four piece play some of the most powerful and upbeat hardcore music you'll hear. Their latest album, "Anonymous" was released late 2013, and peaked at #40 on the US Billboard Chart.

Rounding out the bill will be Australian hardcore juggernaughts Deez Nuts who will have just come off a series of worldwide festival appearances that includes Soundwave (AU), Groezrock (Belgium), Impericon Fest (Germany / UK), Heavy Festival (UK) and Outspoken Festival (Germany). Having spent the majority of 2013 headlining around Europe to thousands of fans a night, this will be their 3rd and Final Australian tour of 2014 after their afternoon slot across Soundwave Festival and this month's sold out Rampage Tour.

Tickets to the Let The Ocean Take Me Tour will be available nationally from 9am, Friday June 20th.

A limited release VIP pre-sale will be made available at 9am, Thursday June 19th. Fans who buy tickets on June 19th will go into the draw to win a chance to stand side of stage during The Amity Affliction's set.
Tickets On Sale JUNE 20!