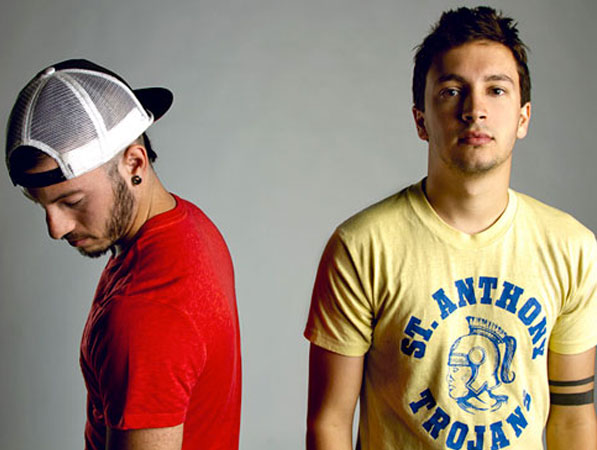 One of the most original new bands to come out of the US, the music duo TWENTY ONE PILOTS have set a course for the East Coast of Australia, this August on their headlining quiet is violent world tour. Having recently exploded on the US music scene, the band is ready to electrify Aussie audiences with their genre-defying piano-driven schizoid rock/pop blend and poetically driven lyrics.

Earlier this year, twenty one pilots floored audiences and critics alike when they supported pop-punk trio Paramore during their Australian arena tour, and the band's buzzworthy performance at the 2014 American MTV Movie Awards had the audience of masked fans jumping in unison to their hit, "Car Radio". twenty one pilots' live show has taken them around the world headlining sold-out venues, and to festivals such as Lollapalloza, Bonanroo, Reading, Leeds, Download and many others.

"With a whirlwind trip through their self-proclaimed "schizoid pop", balaclavas, floor-tom battles and spoken word poetry, twenty one pilots will have gained a number of new fans after last night's performance." Music Feeds

"The best thing since sliced bread... The liveliness and enthusiasm was astounding and not something I have witnessed for some time." 100% Rock Magazine

Tickets for twenty one pilots' August club shows will go on sale at 9am Friday, June 13.

twenty one pilots formed when friends Tyler Joseph and Josh Dun merged their tastes and talents to form a distinct sound, fusing elements of hip-hop, indie rock and punk, making a commitment to deliver a live show unlike any other band.

With their high-energy live performances, the Ohio based duo initially developed a rabid fanbase across the US Midwest, soon growing beyond the US coasts into a global following after constant touring and their deep connection with fans over social media. "Every show we play our hearts out because where we come from you have to grab people's attention and make sure that they never forget you," says Joseph. "To our fans we say we never got our big break, you created our big break. Thank you."

After putting out two self-released albums, including the self-titled twenty one pilots (2009) and Regional At Best (2011), the band signed to Fueled By Ramen and released their studio debut, Vessel, in 2013. twenty one pilots is currently in the studio at work on their next album, slated for release in late 2014.
Tickets On Sale JUNE 13!