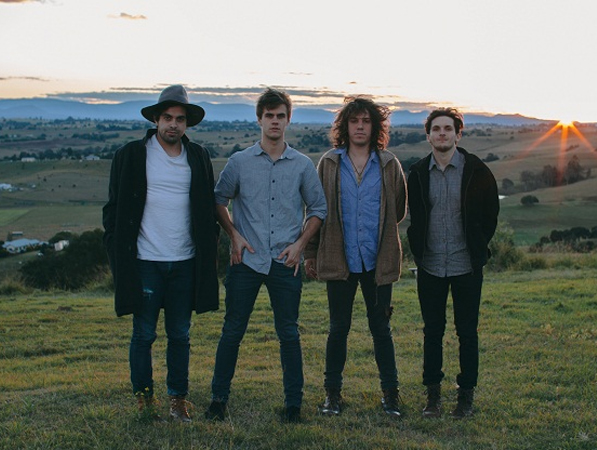 Triple J Unearthed winners & favourites, THE CAIROS, are getting set for the release of their brand new album "Dream Of Reason" on May 9, followed by jam-packed touring schedule for the remainder of this year.

Recorded at Studio 301 in the paradise that is Byron Bay, 'Dream Of Reason' was produced and mixed by Nick DiDia, who has worked with such greats as Powderfinger, Rage Against The Machine and Karnivool. 'We had a lot more time to write the album. And really got to nut things out the way we wanted' Alistar has said of the difference between the release of their EP 'Colours Like Features' and their upcoming release. 'Working with Nick was also great! He is a hugely experienced engineer and producer - not to mention a generally great guy. Aside from his obvious talents in the studio – he also makes a ridiculously good cheesecake!'

Over the last year THE CAIROS have also been working hard on their live shows, including appearances at festivals such as Pete's Ridge, Bigsound, Big Day Out, and Valley Fiesta. They've previously shared the stage with Julian Casablancas, Powderfinger, The Temper Trap, You Am I and many more. Most recently, the band wrapped up a bunch of dates with The Holidays, to rave reviews.

Also on the tour agenda for 2014 is their 'Good Days Tour' which is taking place across Asia. Having spent a bit of time in Singapore and Hanoi last year for a showcase and the CAMA Festival, the band will be heading back in May for shows in Singapore, Hong Kong, Shanghai, Bangkok and Ho Chi Minh City. "We ended up having so much fun that we've been itching to get back ever since. We didn't even know anyone had heard of us over there, but we had people bringing 'We All Buy Stars' inspired animal masks to the shows for us to sign. It's really exciting. We all love travelling and playing music, so to get to combine the two is pretty much a dream come true" Alistar has said of the opportunity.

Hot off the heels of the Asian dates, the band will kick off their highly anticipated album tour of Australia, with the first show happening in Perth before heading to NSW, SA, VIC and QLD.

Hitting the road with them are China's NOVA HEART, who are currently enjoying plenty of triple j love and international blog attention for their single 'My Song 9'. Nova Heart have been taking their live show to the world playing SXSW, Canadian Music Week, Zurich Street Parade/Lethargy Festival, Sound Kapital Tour and the main stage of Clockenflap festival in Hong Kong, sharing the bill with the likes of Santigold, The Cribs, French Horn Rebellion or Bombay Bicycle Club.
Tickets On Sale Now!