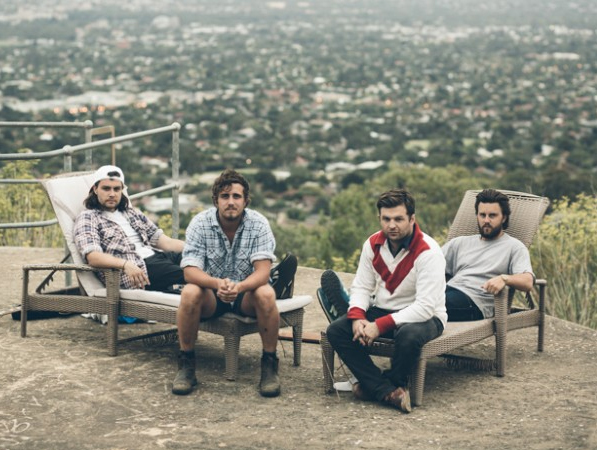 "Bad//Dreems isn't just another Adelaide band; they represent the melodic, the tough and the spirited of that much-maligned city" - Patrick Emery - Beat Magazine

Ivy League are thrilled to welcome Bad//Dreems to the family tree and equally thrilled to have finally signed their first band from Adelaide.

Bad//Dreems' journey from the Adelaide underground continues with the release of their brand new single 'Dumb Ideas', the product of a recent recording session with legendary producer Mark Opitz (AC/DC, Cold Chisel, The Angels, INXS). It will be the first taste of a forthcoming Double A-Side 7" released both digitally and on vinyl.

'Dumb Ideas' is a scathing put-down song, a missive to an ex-lover, or perhaps a clarion call to the boys from Adelaide to stay true to their beginnings as they venture out in the world at large. Listen to 'Dumb Ideas' here.

With so many reasons to celebrate the band will of course be hitting the road - but this won't be any ordinary tour. The 'Dumb Ideas Tour' will see Bad//Dreems touring independent record stores throughout the east coast and Adelaide. Has a record store tour been done before? Maybe, maybe not, we don't really know. But one thing's for sure though - this is a one off experience and a rare chance to see Bad//Dreems this up-close and personal, probably for a long time.

Meeting at their local football club, James Bartold (bass), Alex Cameron (guitar), Ben Marwe (vocals, guitar) and Miles Wilson (drums) got together in a whitegoods' repair warehouse in the shadows of the West End Brewery. Taking influence from Australian guitar bands from the '70s and '80s (Coloured Girls-era Paul Kelly, The Go-Betweens, Coloured Balls) as well as U.S. indie groups of the same era (Wipers, The Replacements), Bad//Dreems quickly emerged from the Adelaide underground refreshingly untouched by modern trends.

Their debut EP 'Badlands' was released in 2013 and was praised by media both at home and abroad. Single 'Hoping For' was added to high rotation on triple j, their EP charted on the influential U.S. College Radio charts, they were one of the most talked about acts at Bigsound 2013 and are a triple j Next Crop act for 2014.

Meanwhile the bands tearaway live show has seen them sell out hometown shows, plus booked to play with the likes of The Scientists, The Preatures, Cosmic Psychos, Wavves, and Violent Soho, as well as festival appearance at St Jerome's Laneway Festival, Groovin The Moo and Boogie Festival.

'Dumb Ideas' out April 14th digitally via Ivy League Records and will be available on vinyl exclusively when you purchase a ticket to the 'Dumb Ideas Tour' or at the shows themselves.
Tickets On Sale Now!