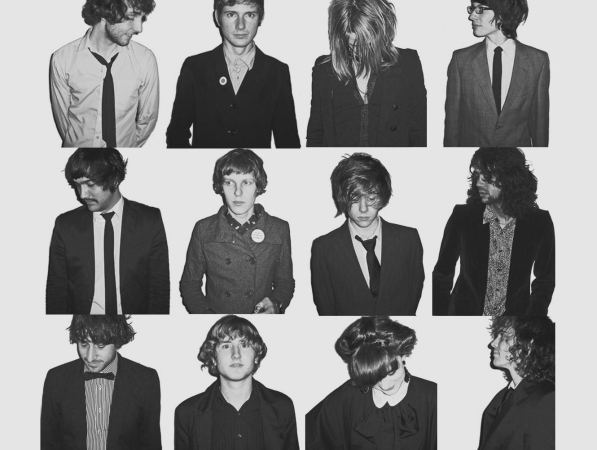 It's been awhile between drinks for Velociraptor. Not literally because just last week they were all hanging out at the pokies and sharing rider scotch and beer, but in a way that people say that statement to imply that as a band they haven't done much in awhile.

Maybe this will make up for it. Introducing the new single 'Ramona'.

Just as the self-titled debut EP was led in with 'Hey Suzanne' and 'The World Warriors' Mini-LP with 'Cynthia' so too will the new album continue the trend. A new girl, a new era. Maybe it's the same girl but the change of name is symbolism for a different stage of ones relationship or lack there-of. That's the thing about songwriting, maaaaaan.

'The World Warriors' was released in September of 2012 to a general feeling of 7/10 but with enough acclaim from their live performances and a couple of hits necessary to keep Velociraptor in demand on the touring circuit.

In the last year and a half a lot has changed. After an international adventure to the UK and Europe the band lost 3 of its original lineup to the bright lights and cloudy skies of the United Kingdom. Never fear though - they've become the Velociraptor Euro Division and will be delivering some dance floor anthems indicative of their new hometowns.

The band also lost another member in a haze of mystery and just haven't heard from the guy in a couple of months. Number 1 theory is that he has been brainwashed by an enemy organisation and the only way we'll be able to win him back is in the final battle when he's trying to kill us and we're all yelling stuff like "Remember who you are!" and trying to trigger memories of his past life when we were all best buds.

Recruiting local legends George Browning and Yuri Johnson takes the current Velociraptor touring pool to 10 and a solid 8 when raptors Shane Parsons and Simon Ridley are on the road as DZ Deathrays.

Now you're up to date, rest assured there's a whole bunch of real cool stuff happening in the next few months. In the meantime please enjoy 'Ramona' as the first taste of the future of the band that they said probably wouldn't still be a band.
Tickets On Sale Now!