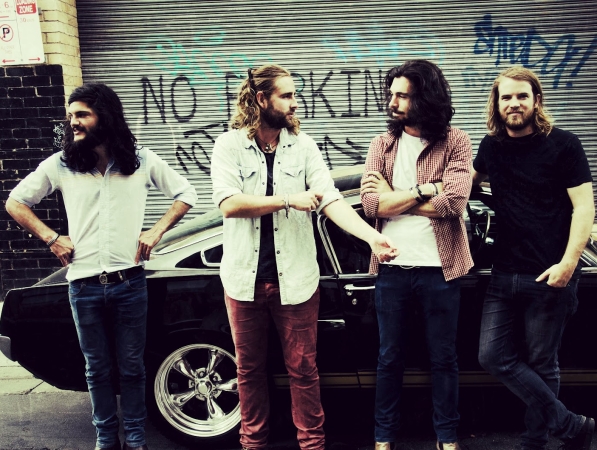 After a huge start to the year, which included blazing the Big Day Out stages across the country alongside Pearl Jam and Arcade Fire, a national beach tour with Calling All Cars, and a #53 entry into the triple j Hottest 100, Melbourne four-piece KINGSWOOD are getting ready to hit the road once again to celebrate the release of their single, 'Suckerpunch'.

The national 'Groovin The Moo / Funk In The Trunk' tour will include shows in Sydney, Brisbane and Melbourne, as well as regional shows as part of the Groovin The Moo festival.

'Suckerpunch' is the first single to be released from the group's forthcoming debut album, set for release in June 2014. After the success of singles including 'Ohio' and 'She's My Baby', the LP recorded with Grammy-award winning producer Vance Powell in Nashville USA, promises to leave a powerful, unparalleled print on the current rock landscape.

'Suckerpunch' follows a hugely successful 2013 for Kingswood. The band released the single 'Ohio' to critical acclaim - placing #53 in the triple j Hottest 100 countdown - along with the 'Change of Heart Deluxe' EP, debuting at #3 on the AIR 100% Album chart and sitting in the Top 20 for 40 weeks and counting. The four-piece then joined the touring circuit with Grinspoon as well as international heavyweights Aerosmith. Their short film, 'Some Motherfucker's Gotta Pay', was received to critical acclaim, followed up by an AIR Award nomination for Best Rock Album and a nomination for Rolling Stone Magazine's 'Patron Reader's Choice Award'.
Tickets On Sale Now!