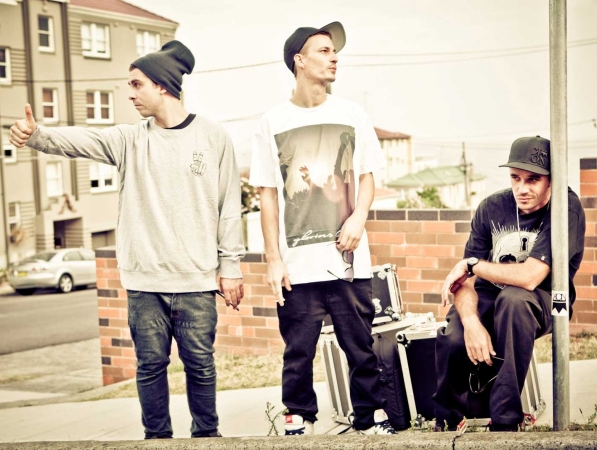 Just months after romantic first single 'Smiles Don't Lie' romped to success, spawning sold-out headline gigs in every town on the tour, and proving a crowd favourite at Thundamentals' 2013 festival appearances - Sprung Festival, Southbound and Falls Festival - the Sydney trio are back in full force. Having just announced, in a triple j exclusive, a massive run of dates to celebrate the [seriously] long-awaited release of third album 'So We Can Remember', out Fri 2 May through Obese Records, Thundamentals present second single 'Something I Said' [ft. Thom Crawford] to stave off some of the anticipation.

Safe to say 'So We Can Remember' will be lovingly welcomed by the trio's fans - 'Thundakats' - who have been waiting patiently since 2011 for a follow up to the group's second record 'Foreverlution'; a release that saw Thundamentals' first entries in both the ARIA and the AIR Charts: #19 on ARIA Australian Charts, #17 on ARIA Urban Charts and #3 on the AIR Charts.

Fans came out in force for 'So We Can Remember's' lead single 'Smiles Don't Lie', creating a #5 debut on the iTunes Hip Hop Charts, and voting the love song into position #32 in triple j's Hottest 100 countdown - the highest position gained by a local hip hop song for the entire year and Thundamentals' second appearance in the nationally-celebrated radio event. The accompanying Tarantino-esque film clip did alright for itself too, clocking up nearly 385,000 views on YouTube, grabbing both Channel V and Rage TV's 'Clip Of The Week' upon release with viewers of the latter getting 'Smiles...' to #44 on the publicly voted Rage TV 'Best Clips Of 2013' [the only local hip hop track to make the cut], along with a nomination for the 'Best Music Video' at the triple j awards, and two wins for Best Hip-Hip Music Video Australia 2013 and Best Independent Music Video NSW 2013 in The Australian Independent Music Video Awards 2013.

The much-loved Blue Mountains via Newtown hip hop trio now, with second single 'Something I Said' [ft. Thom Crawford], flick fans another curve ball continuing their tendency to parallel light and dark in their compositions: while MCs Tuka and Jeswon lyrically level rolled eyes at childish gossips, DJ Morgs drops in the ruckus of kids' playgrounds to drive it home, layering old school beats with a triumphant horn section, handclaps and cute, bouncing, piano to underscore Oscar nominee Thom Crawford's lamenting, soulful vocal in a song destined to be a crowd favourite on the album tour.

Getting across as much of the country as possible, Thundamentals are touring 'So We Can Remember' as part of the national, regional Groovin The Moo Festival juggernaut, as well as playing their own major city launches. For a band who's past shows have included supports for A Tribe Called Quest, Big Boi [Outkast], MF Doom, Lyrics Born, Drapht, Bone Thugs N Harmony, Thundamentals are one of Australia's most accomplished and energetic live acts.
Tickets On Sale March 4th!