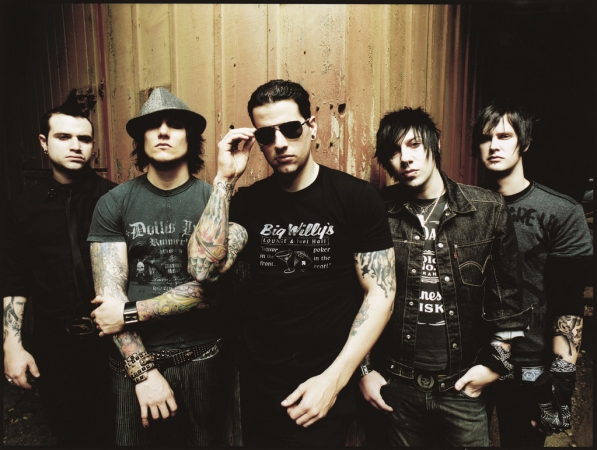 AVENGED SEVENFOLD achieved worldwide success with a string of best-selling albums - including their 2005 platinum breakthrough 'City Of Evil', 2007's 'Avenged Sevenfold', which topped the Billboard Alternative, Hard, and Rock Charts, and two consecutive No 1's on Billboard's Top 200 Albums chart, 'Nightmare' (2010) and their latest 'Hail To The King' - achieving Diamond, Platinum and Gold awards for album sales in nearly a dozen countries. They have also scored a series of Top 10 singles at multiple formats, including 'Bat Country', 'Almost Easy', 'Scream', 'Nightmare', 'Welcome To The Family', 'So Far Away', 'Hail To The King', and their latest, 'Shepherd of Fire'. The band, which hails from Huntington Beach, California, have become known for their spectacular live shows, routinely selling out arenas worldwide and headlining some of the biggest and most prestigious music festivals. This summer they are scheduled to perform shows at the Soundwave Festival in Australia, as well as Rock Im Park and Rock Am Ring in Germany, the PinkPop Festival in Holland, Donington Park in the U.K., and two nights at Summersonic in Japan, along with several others. In November 2012, they made an unprecedented appearance as characters in Call of Duty Black Ops 2 - the biggest-selling video game of all time, which featured the band's performance of 'Carry On', written specifically for the game. AVENGED SEVENFOLD are modern-day metal superstars and their phenomenal live shows have launched them into the stratosphere making them one of the most epic live experiences... "it was clear that this is more than just a band to be reckoned with now. This is a force of nature now firing on all cylinders." - LOUDWIRE

FIVE FINGER DEATH PUNCH consistently remains one of the most explosive live bands on the planet! With primal roars punctuated by the bombastic, the effect is brutal! The band didn't take the easy road on their fourth and fifth albums, 'The Wrong Side of Heaven' and 'The Righteous Side of Hell Vol. 1 & Vol 2' and these 2 albums contain their most their most enigmatic, engaging, and empowering salvos yet.

"...a really attaching collection of fist in the air Headbanging songs, some highly sticky sing along hymns, and actually a solid release full of future stage anthems..." - Metal-temple.com
Tickets On Sale Now!