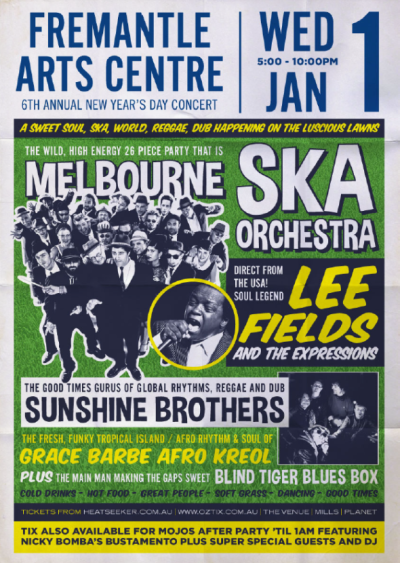 Direct from Melbourne for one show only, the electrifying 26 piece high energy ska delights of
MELBOURNE SKA ORCHESTRA
plus direct from USA and for the first time in Australia. Soul phenomenon
LEE FIELDS & THE EXPRESSIONS (USA)
plus the good times gurus of global rhythms, reggae and dub
SUNSHINE BROTHERS
plus the fresh, funky tropical island / afro rhythm & soul sounds of
GRACE BARBE AFRO KREOL
plus old time MC/DJ legend on the wheels of feel playing castaway-soul-blues-groove-funk-psych-cocktail-jazz
BLIND TIGER BLUES BOX

THE VIBE
Now in its sixth year the New Year's Day event at Fremantle Arts Centre is a date never to be missed as either the perfect alternative to a New Year's Eve frenzy or the perfect antidote for one.

FREMANTLE ARTS CENTRE also plays a big part in the vibe as it is one of the most perfect venues in WA to relax or dance your boots off to quality music with its great location, tiered lawns, excellent facilities, big trees and generally amazing delivery of music events. These line-ups on New Year's Day are always to live for and this year is absolutely no exception. Closing the night will be the totally electrifying MELBOURNE SKA ORCHESTRA playing an exclusive WA show.

Direct from USA soul legend LEE FIELDS tours Australia for the first time. He takes the stage with his band THE EXPRESSIONS which features some of New York's best contemporary soul players from the unparalleled Brooklyn soul scene.

The players have also toured with acts such as The Dap-Kings, Menahan Street Band, El Michels Affair, Charles Bradley and many more.

LEE FIELDS is a true soul phenomenon and this is soul music at its finest and it will touch you in all right places in the New Years Day twilight.

As well as the touring guests - we cannot forget the three local greats also appearing on the bill.

SUNSHINE BROTHERS who have just made their grand re-entry to the scene after a winter break (with some great new tunes) via a raucous performance at Wave Rock Weekender and an absolutely transcendent Mojos gig will do what they do best and play their unique, irreverent and heart-warming blend of dub, reggae and world music at one of their favourite gigs of the year.

GRACE BARBE - hot on the heels of what is sure to be a global breakthrough album release for her - is in world domination mode and playing the best music of her career with her best ever band. Expect nothing less than her exotic trademark Afro-Kreol sound played with positivity, passion and energy. A real treat.

And last but never least is BLIND TIGER BLUES BOX - our anchorman - the main man - our old style MC/DJ on the wheels of feel will be playing castaway-soul-blues-groove-funk-psych-cocktail-jazz on his homemade DJ box and will have the anchor down to keep the night steady and right-on. Blind Tiger is always the coolest in the room and the hottest on the day. He's a heavy gangster of good times and will definitely pimp your ride on the lawns of Fremantle Arts Centre.

So forget the bluster and excesses of New Year's Eve and welcome the new beginnings and possibilities of 2014 with a New Year's Day built specifically to feel good and be good.

What could possibly be sweeter than laying back on the lawn under the trees or kicking it on the dance-floor at one of WA's best venues with some of the greatest music in the world and the best people around.