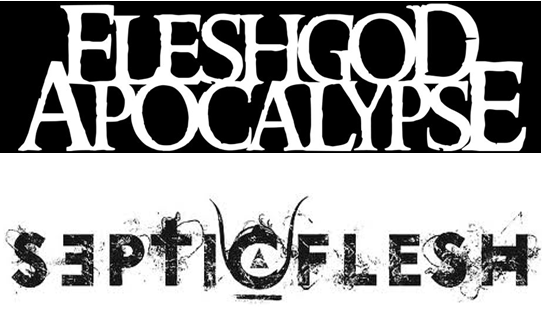 "Septicflesh were like watching a very cinematic dark musical taking you to the edge..." - Metal-Titans.com
"Septicflesh marries black metal and orchestration with great skill..." - Hellbound.ca

The Battle Of Flesh And Blood MMXIV
Prepare your senses for a monumental outburst with a dual headlining bill comprised of two of the world's finest exponents of the genre of Symphonic Death Metal in Italy's Fleshgod Apocalypse and Greece's Septicflesh who are embarking onto Australian shores for a very long awaited and anticipated first tour in May!

Italy's brutal/symphonic horde Fleshgod Apocalypse have forged an identity within the extreme metal world and the underground metal scene by delivering a unique blend of technical death metal interspersed with symphonic elements that have led them to acclaim with fans and critics alike. Their latest release 'Labyrinth' hones in on the band's unique traits such as their grand symphonic arrangements giving fans everything they could hope for and more that takes the band's signature sound to new euphoric heights.

Greece's Septicflesh are one of the pillars of the Greek metal scene, with a career spanning over two decades bolstered with a vast discography. Their sound can be best described as possessing a sound that has sheer brutality combined with melodic lines, mixed with pure devilry and symphonic and operatic parts of the highest calibre of musicianship that results in a vicious combination of aggression, speed, melody, profanity, classical orchestrations and a devious dark atmosphere which engulfs all.

With both bands hailing from two of the world's most historically lauded cities in Rome and Athens respectively, their compositions are ripe with vast amounts of grandeur that result in an aural and visual spectacle that has to be seen to be believed live and in the flesh as it were (pun intended!)

So, symphonic death metal fans, your darkened prayers have been answered and prepare yourself to enter to a Labyrinth that leads into The Great Mass. A dual barrelled symphonic metal onslaught like this only comes once in a dark moon.