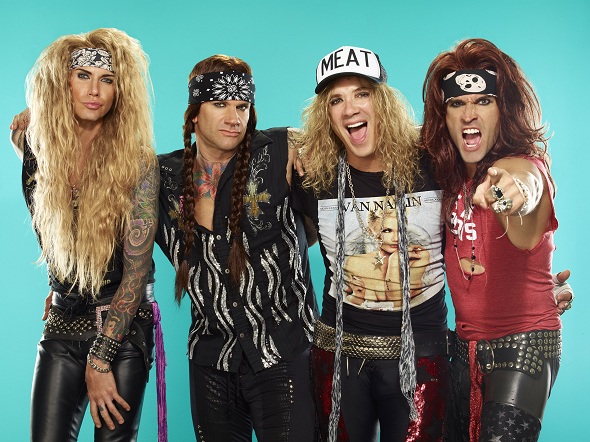 STEEL PANTHER was, for a long time, rock's best-kept secret: a cult legend on the LA scene. But in recent years due to the success of their albums and live shows, the band has enjoyed huge acclaim from fans and peers alike. STEEL PANTHER has been joined on stage by rock and roll icons such as Steven Tyler of Aerosmith, Paul Stanley of KISS, Corey Taylor of Slipknot, Tom Morello of Rage Against The Machine, Chester Bennington of Linkin Park and Green Day to name a few (who knows who will join the lads on stage during their Australian visit!).

STEEL PANTHER has been in the studio lately working with Jay Ruston (Anthrax, Stone Sour, Meatloaf) on their third full-length album. The album is the follow up to the band's critically acclaimed 2011 release, Balls Out.

Not many bands can continually lay claim to constantly selling out shows whenever they tour Australia but STEEL PANTHER proudly sit amongst that elite group. Having recently won Live Act Of The Year in the 2012 Loudwire Music Awards beating out the likes of Iron Maiden, Metallica and Tool amongst others tickets will be snapped up quick...you have been warned!

Steel Panther has teamed up with On The List to provide a variety of VIP ticket packages for the tour including dancing on stage, early entrance, meet and greets, photo ops, parties and more. For more information go to www.SteelPantherRocks.com.