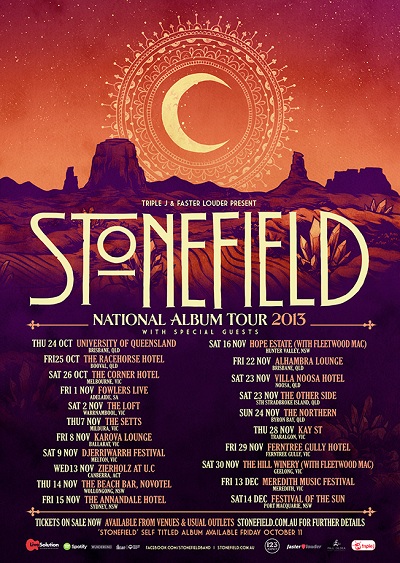 With less than three weeks until the release of their highly anticipated self-titled debut, Amy, Hannah, Sarah and Holly - of Melbourne based rock outfit Stonefield - unveil the dates for a new national tour and their album pre-order options.

Riding the momentum of a soaring radio and video favourite (Put Your Curse On Me), a string of sold out shows across August and a massive BIGSOUND campaign that saw the band partner with Red Bull to throw a packed-out launch party for their album on the first night of the Brisbane industry conference, Stonefield are poised to make their mark on the rest of 2013.

Produced by acclaimed Band of Skulls producer Ian Davenport and mixed by Grammy-nominated Tim Palmer (U2, Pearl Jam), 'Stonefield' is a contemporary take on classic rock 'n' roll. A heavy, raw and startlingly mature collection of songs with an overt blues influence, a trademark of the band.

In support of their debut, Stonefield are once again hitting the road throughout October and November for a collection of metro and regional tour dates, in the lead-up to supporting the legendary Fleetwood Mac (A Day On The Green- Hunter Valley & Geelong) and playing the iconic Meredith Music Festival in December.