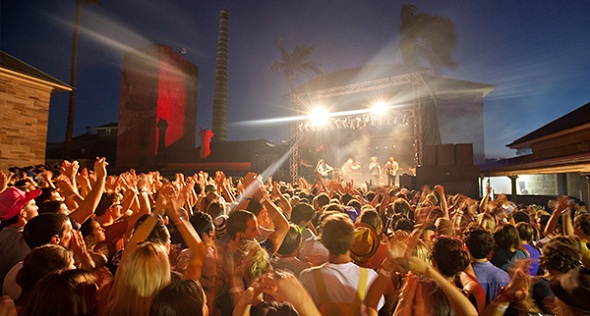 Ahead of its inaugural foray into North America next week, Laneway Festival is excited to unveil its 2014 dates for Australasia, as well as details of some notable changes to some of the festival venues.

In this, the 11th year of the event, Australasia's most forward-thinking festival will again be defined by its one-of-a-kind locations, a line-up featuring tomorrow's superstars alongside the best of the underground, and an array of small yet important creative initiatives selected to give you the best day possible.

The mega-lineup will be announced on 24th September 2013. Stay tuned.

Singapore: Saturday 25th January - The Meadow, Gardens by the Bay
Destined to go one step further in establishing itself as the premier event of its kind in Southeast Asia, the much-anticipated Laneway Festival Singapore returns to The Meadow at Gardens by the Bay. Nestled somewhere in between the lakes and greenery of Singapore's premier garden and the stunning skyline of the city, The Meadow is the perfect outdoor spot for a gathering of indie's rising acts.

Auckland: Monday 27th January - Silo Park
Auckland Laneway is back for another year down at the impressive urban playground of Silo Park in Auckland's Wynyard Quarter. With the iconic silos towering above and the sweet blue sea surrounds, Silo Park is a prime location to enjoy the epic musical acts that are in store for 2014.

Brisbane: Friday 31st January - RNA Showgrounds, Fortitude Valley
2013 was the year Laneway came into its own in Brisbane. Punters enjoyed moving easily between stages and the inspiring contribution from local artists, who turned the site into a glimmering showcase of local talent. In 2014 those artists return, alongside some exciting developments in the food and drinks department and a continuing commitment to the perfect day.

Melbourne: Saturday 1st February - Footscray Community Arts Centre and the River's Edge
After last year's stage move success, the ante has been upped to incorporate a whole new area, moving the two biggest stages to their best locations yet. The move down to the River's Edge will highlight everything that makes us so proud to call Melbourne home. The new space is enhanced by more space and beauty and has given us even more opportunities to augment the high standards you've come to expect from Melbourne Laneway.

Sydney: Sunday 2nd February - Sydney College of the Arts, Rozelle
This year's changes to the site went down a treat and the winning formula continues with the two adjacent stages in Callan Park, plus two stages within the sandstone walls of the Sydney College of Arts, which makes the Sydney leg of the Laneway Festival one of the most unique venues on the Australian festival landscape. There is little better than immersing yourself in a set from an amazing band while the summer sun sets on this park.

Adelaide: Friday 7th February - Harts Mill, Port Adelaide
The event makes a fresh start in a new home at the historic site of Harts Mill, Port Adelaide. With ample space, the festival sits on the absolute waterfront of the Port River and will draw comparisons to the spectacular Melbourne site, renowned for its industrial-meets-lush green locale. Festival promoter Danny Rogers says, "We searched super hard to find a site that we felt could match the experience that other cities have had with Laneway. Renewal SA, the City of Port Adelaide Enfield and a team of locals have worked with us to find a site that ticks all the boxes." People of Adelaide, you spoke up and we listened.

Perth: Saturday 8th February - Esplande Park and West End, Fremantle
Perth Laneway is also on the move to the picturesque setting of the Esplanade Park and historic west end in Fremantle. Adjacent to Fishing Boat Harbour and Bather’s Beach, punters will have the full benefit of the ocean breeze, while taking in music in and around this world-class site.