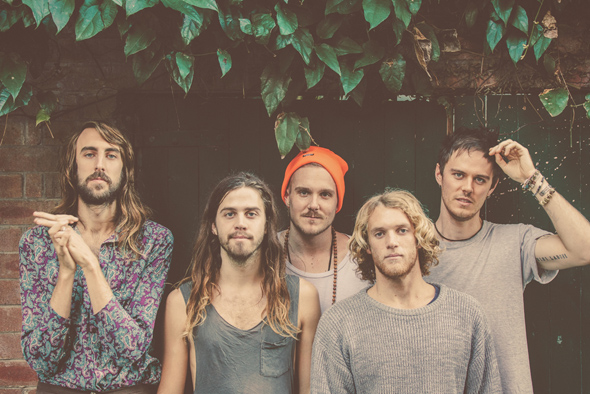 With the release of the transcendental clip for new single 'Dozer', Jinja Safari invite Australian audiences to gather in, breathe deep and discover the mysteries within The Bay Of Fires; a new show that traverses the largest tour footprint Jinja Safari has made on Australia this September and October.

The 16 shows across this glorious land have Jinja Safari chomping at the bit to get back on their native terrain: The Stage. Their legendary on-stage force - seen everywhere from New York, London and India to rapturous audiences at Splendour In The Grass and Falls Festival - will reach its summit on Australian soil this September and October. Sydney, Adelaide and Perth fans under 18 are in for an extra special treat, with those shows all ages.

Armed with their triple j-featured and self-titled debut album, Jinja Safari summons you to participate in a brand new performance, bringing the LP to life. The album has received a bucketload of praise from Australian fans and critics alike, seeing Jinja Safari quickly climb the post to one of Australia's most loved bands.

"Jinja Safari have done it again, and made an amazing album that has secured their place as one of Australia's finest bands." The AU Review 9.7 out of 10

"...By the time the album closes out with the slow-burning Bay Of Fires, you feel like you've been on a 12-track vacation around the world..." MusicFeeds

"Jinja Safari is a shining, scorching, bursting album that has so much to give it can barely contain itself..." TheMusic.com.au

"This record gives and gives again, peaking at the beginning, in the middle and at the end. Jinja Safari will make you happy." Rip It Up Magazine