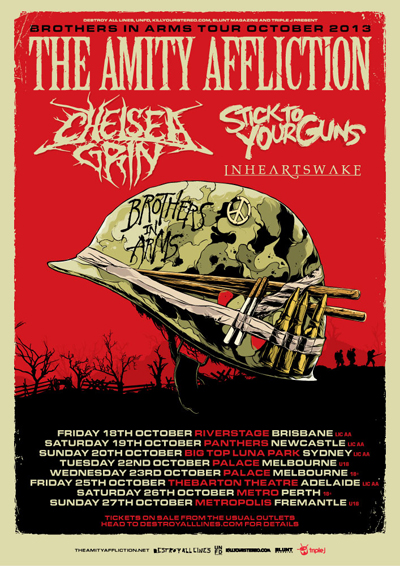 Over the last ten years, The Amity Affliction have become one of Australia's most respected and beloved bands. Armed with a party attitude and a staunch work ethic, they have emerged as leaders in the Australian hardcore scene. Their last album Chasing Ghosts comfortably claimed #1 spot on the Australian ARIA album chart upon debut, is now certified gold and continuing to amass the adoration of the public as the band tour relentlessly in its honour.

Currently enduring the marathon event of the US summer, Vans Warped Tour, Amity will return to home shores this October to share the stage with UK's metalcore guns Chelsea Grin, Orange County melodic hardcore gurus Stick To Your Guns, as well as local up-and-comers In Hearts Wake.

Brothers In Arms is an apt title for the upcoming tour; their biggest local lap to date. Not only is it taken from Greens Ave, the next single from the Chasing Ghosts album, it's also the perfect way to capture the spirit and strength of the bonds formed between touring bands and the sentiment behind bringing quality international acts to Australian shores.

Tickets On Sale 27th of June