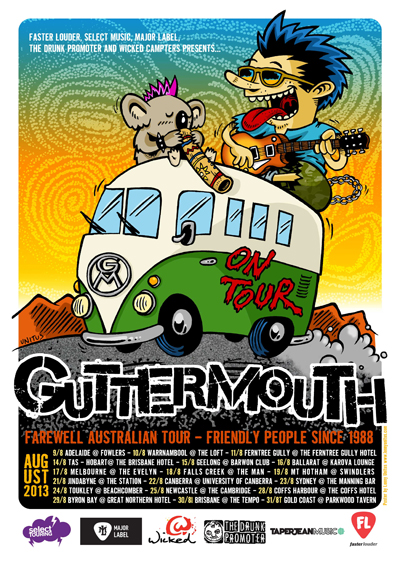 Over the past 25 years Guttermouth have seen the rise and fall of many of their punk rock contemporaries and if you ask vocalist Mark Adkins his thoughts about the scene he would tell you "Don't lump us in with all those watered down 90's bands, we're a product of the 80's. That's where we get our inspiration."

After 10 studio albums, Guttermouth will be jumping on the tour bus for their last ever tour of Australia leaving behind decades of memories in their well acquainted home away from home.

Emerging from Orange County in the late '80s, Guttermouth have outlived many of their punk rock equals while managing to maintain their explicit in-your-face attitude, destroying any hope of a wholesome reputation in favour of fun.

Always one to put his money where his mouth is, Adkins has been rebelling against "society standards" since the inception of the band and not without ramifications; Adkins was arrested in '95 at the Glen Helen Blockbuster Pavilion for assault with a deadly weapon, using the microphone to incite the crowd into near riot. He was also banned from Canada for a period of years after a public indecency incident and in 2004 Adkins was requested to leave the Vans Warped Tour after he made potent note on stage of the constant ill informed political messages and pandering between other Warped Tour bands.

Although their behavior has been questionable, Guttermouth have returned to Australian shores several times over the last 25 years, playing major festivals including Livid Festival, Warped Tour and touring with the likes of Reel Big Fish. The band delivers live shows with a unique energy that brings punters back tour after tour.

While it's sad to see an end of an era, the band are excitedly anticipating the adventure of taking a Wicked Camper Van around the country and blessing Australian crowds with a final farewell in the best way they know how - an honest punk rock show.

A band often labeled as the best live punk band you can still see today, this August will be the first Australian winter tour for the band encompassing the alpine slopes of Jindabyne, Falls Creek and Mt Hotham, covering most major capital cities and returning to the popular regional and surfing towns Guttermouth have grown to know and love such as the Gold Coast, Newcastle, and Toukley. Pushing the envelope and playing towns that many other international bands neglect time and time again.

Join Guttermouth for all the chaos in their Farewell Tour, August 2013.
Friendly People since 1988!
Tickets On Sale 6th of June