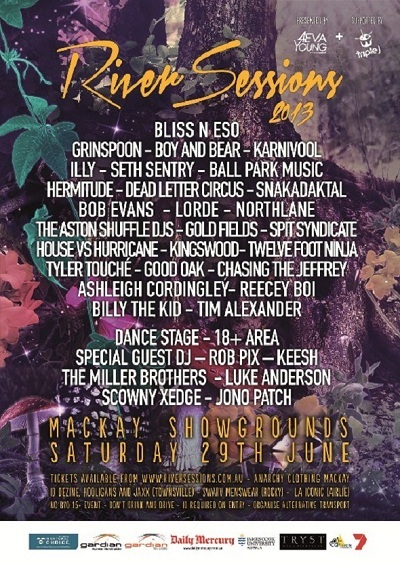 The Finalised Line-up for River Sessions 2013 has finally arrived! The largest single day non touring regional festival in QLD growing by the day 4 Eva Young Entertainment with the support of triple j are pleased to announce the first line up release for Mackay, Whitsunday's and Central QLD's premier music festival. River Sessions will be held on Saturday the 29th of June at the Mackay Showgrounds.

The River Sessions line-up in 2013 will again top the previous year with some of the biggest musical acts in Australia, with a wide range of genres being represented on the day from rock, hip hop, folk, dance/electronic, pop, indie and alternative rock. The festival will feature two main stages with over 11 hours of diverse entertainment, including the silent disco which since being added in 2011 has been a huge hit. The festival will also feature a third dance stage in the over 18 area which is new in 2013.

The River Sessions 2013 second line-up includes Australia rock royalty, multi-platinum and aria award winners GRINSPOON. With their seventh studio album released in late 2012 a relentless touring schedule including Big Day Out and playing alongside Aerosmith we are honoured to have one of the greatest rock bands Australia has ever produced on the River Sessions line-up in 2013.

Hip Hop superstar SETH SENTRY with debut album This Was Tomorrow released in late 2012 and having two singles "Dear Science" and "Float Away" placed in Triple J's Hottest 100 for 2012 and his live show lorded around the country it has been huge year.