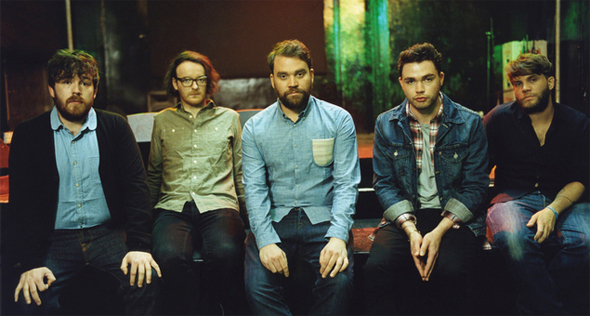 Scottish indie-rockers Frightened Rabbit will bring their new album Pedestrian Verse to Australia for a national tour in April and May with the Groovin the Moo festival and three east coast sideshows,

The album is the follow-up to 2010's The Winter of Mixed Drinks album, which featured the singles 'Swim Until You Can't See Land' and 'Nothing Like You', as well as a pair of EPs including last year's State Hospital. The Winter Of Mixed Drinks won a rave review from FasterLouder, with their reviewer describing it as "both epic and subdued, full of potent and melancholy lyrics in songs that range from the epic to the sparse".

Commenting on the new album, singer Scott Hutchison said the band had stepped up another level with the help of producer Leo Abrahams (Jarvis Cocker, Carl Barât, Paul Simon). "He threw our music into areas we had not previously imagined," Hutchison explained. "More than any other record we've done this has been a genuine journey of discovery into new ways of working in order to develop and fully realise each of the songs. As a result, I think Pedestrian Verse the strongest and most interesting record we've made to date."

The Scottish crew toured Australia twice in 2010 joining the St Jerome's Laneway Festival line-up in February and then returning to play at Splendour in the Grass. The group has toured Australia three times playing sets at Pyramid Rock, Woodford Folk Festival and Peats Ridge in addition to their Laneway and Splendour jaunts.