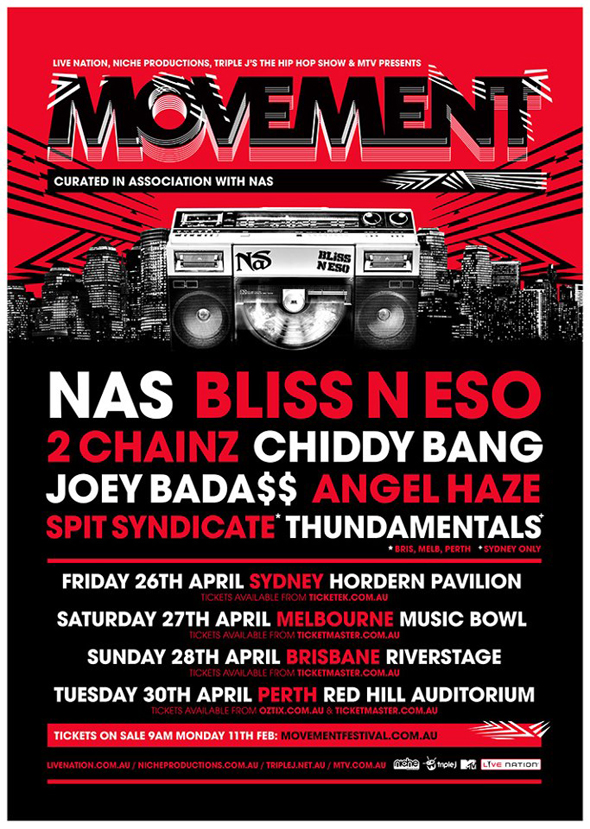 Live Nation and Niche Productions are proud to present, in association with American Hip-Hop legend Nas, the inaugural 2013 Australian Movement Festival. Filling the void of credible Hip-Hop events in Australia, the Movement Festival places Grammy award winning Hip Hop heavyweights, with mixtape kings and local heros in what's destined to takeover as THE Hip Hop and Urban event each and every year in Australia.

Setting a new standard, Movement looks to the future of Hip Hop and Rap whilst still catering to a solid Hip-Hop foundation, thanks to the festival's co-headliner and co-curator Nas. With more than 20 years in the business and often called the greatest rapper alive, Nas is an artist who needs little or no introduction. The gifted Queens, NY lyricist has come on board as a partner for the event, hand-picking a line-up of the best local and international artists, from Grammy nominees to up and coming mixtape kings and queens. In the lead up to this year's event Nas has also announced he will be recording a collaboration with ARIA Award winners and multi-platinum selling local artist Bliss N Eso (who will also be launching their new album in time for Movement 2013), a significant feat which demonstrates the depth of Nas' involvement in Movement and his commitment to the territory.

Nas' authority over the genre makes him the ideal candidate to command Movement's inaugural event, and his contribution will be ongoing as he will also be involved in an artistic and programming capacity for the 2014 and 2015 events.

Nas' 2012 LP Life Is Good has been heralded as one of the best of his 11 album spanning career. A potent collection of what he is best known for; amazing wordplay, intricately woven street stories and the best collaborations in the business it features guest spots from Rick Ross, Mary J Blige, Miguel, the late Amy Winehouse and many more. His catalogue boasts such certifiable Hip Hop classics as Made You Look, Hip Hop Is Dead, I Can, The Don, As We Enter (with Damian Marley), If I Ruled The World, It Ain't Hard To Tell, The World Is Yours, One Love making him one of the most impressive figures in the genre ever.

Arguably Australia's biggest Hip Hop group, Bliss N Eso wasted no time graduating from triple j airplay to racking up the spins on commercial networks. In 2006, Bliss N Eso's second album, Day of the Dog, was released and became the first Australian hip-hop release to debut in ARIA's top 50. It also earned Bliss N Eso an ARIA nomination for Best Urban Release in 2006 with sales exceeding all benchmarks for a local hip-hop release. Bliss N Eso are crusaders in the fight against poverty, in 2007 the boys went on a Make Poverty History Zero Seven road trip tour and ventured on a journey with MTV and the Oaktree Foundation to some of the poorest regions in South Africa. Their third LP Flying Colours, broke records for an Australian hip-hop act. With a top 10 ARIA debut, the album became the highest selling local hip-hop album of the year and with their third nomination in as many years, Bliss N Eso took out the ARIA Award for 2008's Best Urban Release.

In 2010 Bliss N Eso released their 4th Album Running On Air to critical acclaim, the album debuted at #1 on the ARIA charts and achieved gold sales within its first week. Known for their electrifying live shows Bliss N Eso currently hold the record for the biggest local hip-hop tour of all time from their 2011 Australian tour, the Sydney trio are set to tear the roof off all Movement venues.

Joining Nas and Bliss N Eso is debatably one of the most heard voices in Rap in 2012: 2 Chainz. Another Def Jam signee, Chainz appeared on such massive tracks as Mercy (with Kanye West for Cruel Summer), Beez In The Trap (Nicki Minaj) and his own club hits Birthday Song and I Luv Dem Strippers. 2 Chainz has become a dominant force and somewhat the unofficial voice of Trap music.

Radio faves Chiddy Bang return to Australia after tearing up the Parklife circuit 2012. Flanked by certified radio and chart bangers like the ARIA chart top 10 and MGMT sampling Opposite Of Adults, Mind Your Manners or Ray Charles, Chiddy Bang bring an overwhelming party vibe to Movement's line-up.

Also on the bill are mixtape King and Queen Joey Bada$$ and Angel Haze, who are poised to set the world on fire with their new albums in 2013. Bada$$ is known for his throwback style, leaning more on beats akin to A Tribe Called Quest than many of his contemporaries but still with a modern twist – just check his triple j added single Waves - https://soundcloud.com/thesmokersclub/joey-badass-waves (from the incredible 1999 mixtape) or recent collaboration with DJ Premier. His star is fast on the rise but don't let his recent beef with Lil B confuse style over substance, Joey Bada$$ is amassing an amount of fans the world over thanks to his blunted beats and quick witted rhymes.

Angel Haze's Reservation mixtape from 2012 was a certified hit and has seen her become somewhat of a media darling thanks to her razor sharp tongue and super savy collabs including Rudimental's Hell Could Freeze Over. With four mixtapes under her belt, Angel Haze has also been involved in a 2012 BET cypher and was awarded MTV Brand New for 2013, BBC Sound of 2013, NME 50 Tracks of 2012 (New York #29) and Pitchfork Media 100 Best Tracks of 2012 (Werkin Girls #75).

Rounding out the line-up are Spit Syndicate (Melb, Bris and Perth only) and Thundamentals (Sydney only), two well respected local groups who epitmoise the direction in which Hip Hop is headed in Australia. Opening the day will be a triple j Unearthed Winner judged in each city by host of triple j Hip Hop Show host Hau Latukefu and the team at triple j, plus seamlessly segueing the live sets will be a host of each city's best DJs.

Taking the Hip Hop scene to exciting new heights Movement hits Australia late April, and promises to give audiences a quality event with this all star line-up of both local and international talent. Do not miss out on the Hip Hop event of 2013!