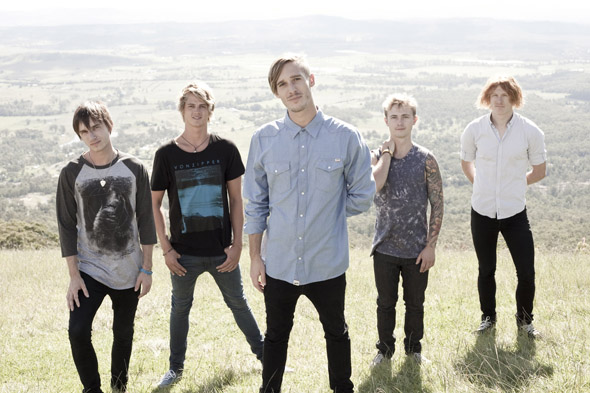 The track is sure to be one of this summer's hottest releases and features on the band's second EP The New Kids. The meaning behind the song is simple says guitarist Alex "Pidgey" Pundyk. "No matter what you have going on in life, sometimes you need to let yourself go and have some fun."

For singer Jay Bainbridge, the idea of the song came from an overwhelming pressure in the recording process of The New Kids EP. "I was feeling overwhelmed by the pressure of the recording until I came to the realisation that I'm here living my dream making music with my best friends". "We all have something we are chasing after - it's a reminder to enjoy the here and now, if you get too caught up in the work of your passion you can kill it."

"It's not about the destination, it's about the journey" says Bainbridge which is fitting for the monumental year the Gold Coast five-piece have experienced fresh from their first ARIA Award appearance in 2012 and also having featured on the Rock The Schools Tour and supporting the likes of Good Charlotte, Simple Plan, Yellowcard, The Living End and The Darkness. The band has also earned a spot in the coveted top ten of Channel V's Oz Artist Of The Year 2012 alongside Delta Goodrem, Guy Sebastian, Something For Kate and The Veronicas to name a few. Nine Sons Of Dan won a wild card entry in to the top 50 and remained there on the strength of viewer votes.

Described by Kill Your Stereo.com as an EP that "paints a picture of a group who have the potential for serious commercial success," The New Kids is Nine Sons Of Dan's second offering following 2010's debut Landslide which featured radio favourite single She's So Fine which has just clocked up over 100,000 views on YouTube.

Released worldwide on June 29 2012, with acclaimed Producer J.R. McNeally (Anberlin/Paramore) and Forrester Savell (Karnivool/The Butterfly Effect/Dead Letter Circus) behind the helm, The New Kids has garnered world-wide attention debuting in Australia at #13 on the AIR Albums Chart and lead single "Diamond Skin" debuting #20 on the AIR singles charts. The six-track EP is also getting attention in International markets having been added to over 170 radio stations in North America.